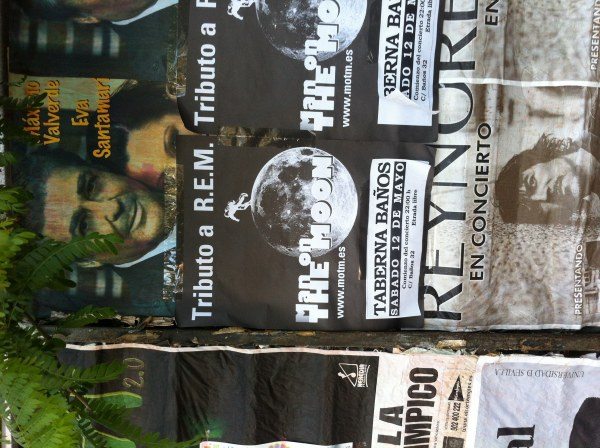 We came across this, ahem, hilarious nod to R.E.M. in The Onion earlier this week (caption goes with photo above) and the guys, to say the least, were pretty amused:

Ahmadinejad Kind Of Getting Back Into Old R.E.M. Again. The Iranian president inspects one of the band’s early Mitch Easter-produced classics

TEHRAN—Iranian president Mahmoud Ahmadinejad told reporters Thursday he was kind of getting back into old R.E.M. again, rediscovering his once-great passion for the alternative rock group’s first six albums.

Ahmadinejad, leader of the Islamic Republic of Iran’s conservative political coalition, confirmed that ever since R.E.M. broke up in September 2011, he had been revisiting the Athens, GA band’s catalog and was once again really digging its earlier stuff.

“Listening to some of those early albums they did for [record label] I.R.S. has reminded me of how great R.E.M. really was,” said the 55-year-old former mayor of Tehran, who is known for his rigorous implementation of radical Islamist policies throughout Iran. “Stipe’s cryptic vocals combined with Buck’s bright, chiming guitar hooks, Mills’ melodic bass lines, and the driving beat of Bill Berry’s drums creates this ethereal sound that just completely kicks ass.”

Read the full article at the onion.com

Speaking of The Onion, A.V. Club has posted the fourth installment of their six part series on R.E.M. at avclub.com. This one is titled “Who threw the crushing blow? (Up to Around The Sun).”

On May 28th, Mike will once again be in the lineup for a performance of Big Star Third… this time at the Barbican Theater in London. Guest singers include Jon Auer, Brendan Benson, Norman Blake (Teenage Fanclub), Skylar Gudasz, Brett Harris, Django Haskins, Robyn Hitchcock, Ira Kaplan (Yo La Tengo), Sondre Lerche, Ken Stringfellow, Alexis Taylor (Hot Chip), and Sharon Van Etten. They will be joining the usual suspects: Charles Cleaver, Mitch Easter, Mike Mills (R.E.M.), Chris Stamey, Jody Stephens, and Ray Davies. Visit bigstarthird.com for more information on the project, and check out this article in the Guardian for a really comprehensive look at the legendary album.

With Mothers Day this weekend, we wanted to bring everyone’s attention to the “Second Chance on Shoot First” campaign which was launched after Trayvon Martin’s death with the support of prominent civil rights leaders, law enforcement officials and New York City Mayor Michael Bloomberg to oppose reckless Shoot First laws that are on the books of 26 states and pending in 10 more. Sybrina Fulton, the mother of Florida shooting victim Trayvon Martin, released a video asking parents nationwide to support the Second Chance on Shoot First campaign, a new national partnership working to reform, repeal and prevent passage of new Florida-style “Shoot First” laws around the country. In the video, which debuted this morning on Russell Simmons’ GlobalGrind.com , Ms. Fulton asks parents to join her in sending an electronic Mother’s Day card to state governors, urging them to re-examine these dangerous laws.

“This will be my first Mother’s Day without my son, Trayvon. I know it will be hard, but with my faith, family, and the outpouring of national support, I will get through.

“On Sunday, I’m going to say a prayer for other mothers across America who share this unbearable pain. Just like me, 30,000 mothers lost their children this year to senseless gunviolence. Nobody can bring our babies back, but it would bring us some comfort if we can spare other mothers the pain that we will feel on this Mother’s Day, and every day for the rest of our lives.

“I’m asking you to join Florida by calling upon the governor of your state to re-examine similar Stand Your Ground laws throughout the nation to keep our families safe. I thank you from the bottom of my heart.”

Watch the video & send a Mother’s Day Card to Your Governor at secondchancecampaign.org. You can also follow the campaign on Twitter @SecondChance.

**Photo below is from our good friend and guitar tech wizard Bob Weber who is on tour in Spain.