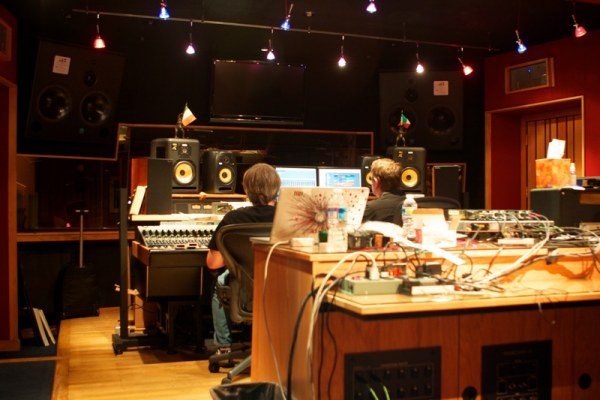 As Bertis noted in his postcard dated September 10th, the band has been in Nashville putting the finishing touches on their next record for the past couple of weeks. Today, we can confirm that the guys have wrapped up things in Nashville. All signs are pointing toward a spring 2011 release, so please stay tuned.

For now, enjoy the photos from Nashville and have a look at some of the other things going on in and around the R.E.M. world:

Earlier this week, we reported that New West Records will release a DVD from the acclaimed PBS television program Austin City Limits titled R.E.M. Live From Austin, TX. We’re excited about this release which will take place on October 26th. Read more about that here and be sure to watch videos of Living Well Is The Best Revenge and Man On The Moon from the forthcoming DVD, HERE.

Check out Michael’s guide to New Orleans at GOOP.com.

Check out the next chapter in the Baseball Project’s exclusive Broadside Ballads series on ESPN.COM. Written by Scott McCaughey, “DL Blues” chronicles the trials and tribulations of players who have had their seasons ended by injury. It’s also the only song in the history of rock to include the words: meniscus, shaving cream pie and labrum.

Our good friend Ken Stringfellow wrote in to report that The Posies are set to release a new album called “BLOOD/CANDY” on Rykodisc Sept. 28; it will be the band’s first album in 5 years.

You can preview the song Licenses to Hide (feat. Lisa Lobsinger from Broken Social Scene) here.

Ken also reports that the band hits the road in Europe later this month. In November and December, the Posies will play North America with Brendan Benson and Seattle’s Aqueduct. Jon & Ken will be part of Brendan’s band for the tour.

Visit theposies.net for all tour details.

And finally, Flagpole reports that Pitchfork TV is featuring the documentary from Vic Chesnutt & Elf Power and the Amorphous Strums’ 2009 European tour on its one-week-only channel. Read more about it here.

Congratulations to our friends at Hotel Indigo here in Athens who won the Urban Land Institute’s “Excellence In Development” Award last night.