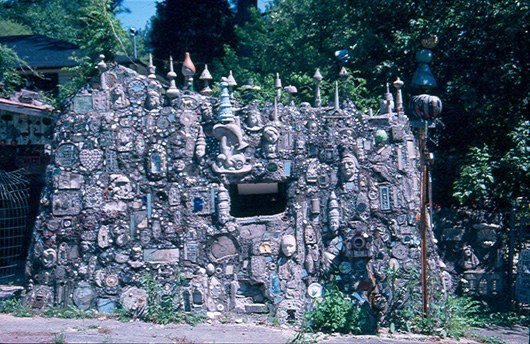 As we reported yesterday, the AV Club has posted a cool video look at some of the sites essential to the R.E.M. pilgrimage. Check it out at avclub.com

Celebrated folk artist Howard Finster’s amazing creation Paradise Garden has received a $445,000 restoration grant. The site has fallen into great disrepair in recent years and is listed among the Georgia Trust For Historic Preservation’s “Places in Peril,” so the grant is welcome news. AJC.com reports that “The grant to Chattooga County, which purchased what is considered the prolific Finster’s greatest creation late last year, is from ArtPlace America, a new private-public partnership of top national foundations and banks and various federal agencies including the National Endowment for the Arts.” More here.

Drivin’ N’ Cryin’ has released the first of four new EPs expected to be issued over the next twelve months. The first of these, Songs From The Laundromat is a five-song EP which includes R.E.M., D n C’s homage to their friends and fellow musicians from Athens, GA. See how many references you can find to R.E.M. songs, sounds, and styles in the song at relix.com.

Drivin’ N Cryin’ is also holding a video contest for their new single R.E.M. through June 30th. Here’s how it’s described: “In recognition of R.E.M.’s pioneering contribution to independent film and music video, we want our fans to create videos for our online YouTube gallery.” More here…

Finally, if you’re in Chapel Hill, NC, this weekend, be sure to check out Drivin’ N Cryin’ at The Cat’s Cradle where they’ll be playing Saturday night with another great band from Raleigh, The Connells.

THE INVISIBLE WAR: DOCUMENTARY ON SEXUAL ASSAULT IN THE MILITARY OPENS JUNE 22ND

On June 22nd, The Invisible War, From OscarÃÂ®- and EmmyÃÂ®-nominated filmmaker Kirby Dick comes The Invisible War, a groundbreaking investigation about one of America’s most shameful and best kept secrets: the epidemic of rape within the U.S. military. The film paints a startling picture of the extent of the problem—today, a female soldier in combat zones is more likely to be raped by a fellow soldier than killed by enemy fire. The Department of Defense estimates there were a staggering 19,300 service members sexually assaulted in 2010 alone.

Focusing on the powerfully emotional stories of rape victims, The Invisible War is a moving indictment of the systemic cover-up of military sex crimes, chronicling the women’s struggles to rebuild their lives and fight for justice. It also features hard-hitting interviews with high-ranking military officials and members of Congress that reveal the perfect storm of conditions that exist for rape in the military, its long-hidden history, and what can be done to bring about much-needed change.Watch the trailer at invisiblewarmovie.com.

GET SOME MINUS FIVE VINYL

Yep Roc Records is happy to announce the vinyl release of the much praised Minus 5 self-titled album (a.k.a. “The Gun Album”). The release includes a 180 gram vinyl 12″ of the entire album plus an additional 7″ featuring (A)”Aw Shit Man – Original Version” and (B) “Mary Lou” for free! Get it at yeproc.com.

Congratulations to our friend Peter Dale who has been named one of Food and Wine’s Best New Chef’s!