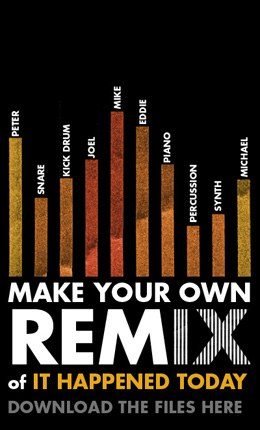 The Remix Project for IT HAPPENED TODAY which kicked off earlier this week has been a rousing success with over 100 remixed versions of the song posted at Soundcloud.com. If you would like to try your own hand at it, go just below to grab all the multi-track files which you can download, remix, reimagine, & remake. They are in AIFF and Garageband formats, so pick what works for you and get started. Visit Soundcloud.com and upload your results.

Check out some of our FAVORITES here!

Never one to set down his guitar for long, Peter and his The Baseball Project bandmates Scott McCaughey, Steve Wynn and Linda Pitmon, have announced the first dates of what looks to be a busy 2011 touring schedule. In addition to these dates, the band will be performing a slew of shows at South By Southwest March 16 – 18, including a Friday night KUT radio showcase and live broadcast, and will be appearing at numerous Major League spring training games and events in the Phoenix area March 22 – 28. Look for more dates coming soon!

ROLLING STONE TAKES AN EARLY LOOK AT COLLAPSE INTO NOW

David Fricke of Rolling Stone takes a look at R.E.M.’s upcoming record in an article posted earlier this week at rollingstone.com called R.E.M. ROAR BACK WITH COLLAPSE INTO NOW

Thanks to Scott McCaughey for tipping us off on this excellent cover of Cuyahoga by the Decemberists: