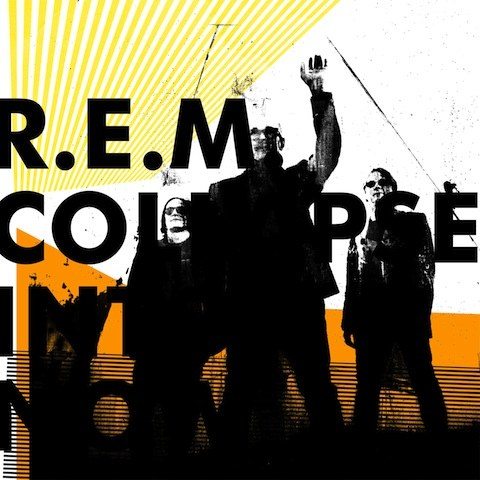 With the release of COLLAPSE INTO NOW just two weeks away in some countries, excitement in the R.E.M. world is at a fever pitch. After sharing five songs from the new record over the past few weeks, we’re ready for the world to hear the full record. Unfortunately we can’t speed up time, but we can highlight some of the R.E.M. news heading into the weekend:

As of today an impressive 179 remixes of It Happened Today have been posted at soundcloud.com. The project is ongoing so there’s still time for you to create your own. For more information click here.

In his insightful interview with musicvidkid.com, Mine Smell Like Honey director Dominic DeJoseph discusses some of the ideas that shaped the direction of the video: “Black and white was the obvious choice given that we were going for a silent movie look,” he says. “We were also thinking about [Andy] Warhol and [Jean-Luc] Godard with the color field effects and [David] Bowie’s album cover for Lodger at the end where Michael ends up in essentially the exact same position.” Read Dominic’s thoughts on some of the other elements that inspired the making of the video as well as what it was like to film during a 100-plus degree heat wave in Berlin while rolling Michael up the stairs here.

TICKETS ON SALE FOR COLLAPSE INTO NOW LISTENING PARTY

Tickets for the COLLAPSE INTO NOW pre-listening party are available at athensmusic.net and, according to event-coordinator Jeff Montgomery, sales have been brisk. The event is scheduled for Monday night, March 7th, at the 40 Watt Club in Athens. Proceeds from the listening party benefit Community Connection of Northeast Georgia & Family Connection / Communities in Schools of Athens / Whatever It Takes. For more information, please go here.

Michael will perform at the 21st Annual Tibet House Benefit Concert at Carnegie Hall on Thursday, March 3rd along with Philip Glass, Angelique Kidjo, James McCartney, The Roots, Patti Smith (with Jesse Smith) and Michael Campbell. Tickets for the concert are on sale now and can be purchased by calling Carnegie Charge at 212.247.7800, or in person at the Carnegie Hall Box Office (57th Street and Seventh Avenue). For more information about the concert, please visit Tibethouse.us.

As we announced two days ago, Mike will be playing at a Big Star tribute show in New York City. Tickets are now available for the March 26th show at the Baruch Performing Arts Center at Mason Hall. Read more about the show here.

Spin has posted the first review of COLLAPSE INTO NOW.

P.S. As we were posting details about the upcoming Big Star tribute in New York City, we were presented with an online Petition to have Big Star added to the ballot for the Rock and Roll Hall of Fame. We approve!

The Docker’s “Wear the Pants Project” is accepting entries from individuals with “big plans” to make a difference in the world but who may lack the funds to put their plans into action.

One idea that we really like–Deborah Gonzalez’s plan to provide no/low cost legal services to help prevent and fight against artistic censorship around the world–has been entered in the contest. Please have a look and if you feel so-inclined, cast your vote in support of Deborah’s idea here.

For more information on her plan and the link to general information about the Docker’s Contest please go here.