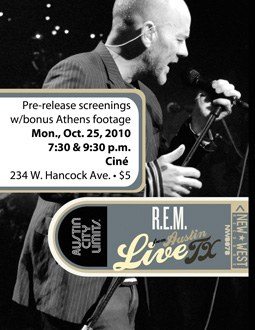 The screening will also include footage from Vincent Moon’s celebrated Takeaway Shows. Additionally, copies of the DVD will be available for special advance purchase at the event. For more information about the screening, which benefits Whatever It Takes and Community Connection, please go here.

The DVD will be available in stores and online retail outlets on Tuesday, October 26th. To pre-order a copy, please visit amazon.com.

Also on Tuesday, October 26th, Italian newspaper La Repubblica and magazine L’Espresso kick off their special R.E.M. “kiosk project”. Over the course of ten consecutive weeks from Oct. 26th through December 28th, the two publications will bundle a different R.E.M. title beginning with GREEN and concluding with IN VIEW 1988-2003: THE BEST OF R.E.M. Good stuff… Ciao Italia!

On October 19th, Michael attended a benefit in New York City for Free The Slaves, an organization which works to end human trafficking and to help liberate the 27 million people enslaved around the world. According to looktothestars.org, Free The Slaves works with a wide variety of people, be it Restavek children in Haiti, war children in Uganda, women and children forced into prostitution in Nepal or entire villages in debt bondage in India. Free The Slaves rescues, rehabilitates and educates victims, and also does subÃÂ­stantial advocacy on their behalf. Through on-the-ground partnerships in Haiti, Brazil, Ghana, Uganda, Congo, India and Nepal, Free The Slaves focuses on systemic changes to ensure that the communities they work with will never be vulnerable to slavery again.

As Archbishop Desmond Tutu says, “None of us is truly free while others remain enslaved,” so please visit Freethe Slaves.net to learn how you can help with the fight to end slavery.

There’s no disputing the fact that the 40 Watt Club, much like the Tree That Owns Itself, Weaver D’s, the double-barrel cannon, and so many of Athens’ multitude of icons, is an Athens institution. The Red and Black, the newspaper for the University of Georgia, echoes this sentiment in this article on the “Watt.”

R.E.M.’s most recent performance at the 40 Watt came in 2006 during the Finest Worksongs benefit show:

The guys also played there in 1992 at a benefit concert for Greenpeace:

And filmed the video for “Turn You Inside-Out” with Jim Herbert (go to HQTV to view).

If you’re in Athens this weekend, it’s not too late to join in on the first-ever Athens Half Marathon…