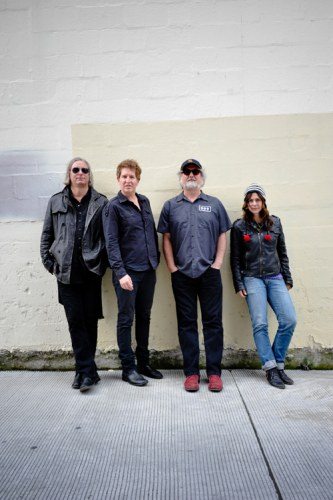 The Collapse Into Now Film Project will screen on two occasions during Filmfest Dresden — an International Short Film Festival – in Germany this April. The first screening occurs at the Albertinum Museum — a collection of sculptures and modern art – on April 19th at 8PM. The Albertinum will also play host to an exhibit by famed photographer and award-winning director Anton Corbijn called “R.E.M. seen between 1990 — 2010.” A second screening will take place on Saturday, April 21st, at 10:30PM at the Movie Theatre Schauburg in Dresden.

An R.E.M.-themed B&B in which every room is inspired by one of the band’s songs has recently opened in Rome. This sounds like every R.E.M. fan’s dream! Check it out here.

THE BASEBALL PROJECT TO PERFORM AT THE METROPOLITAN MUSEUM OF ART IN APRIL 13 SPECTRUM EVENT: AN EVENING OF BASEBALL HISTORY AND MUSIC

The Baseball Project — the baseball-themed indie rock super-group featuring Scott McCaughey, Steve Wynn, Linda Pitmon, Peter Buck and for this performance, Mike Mills — will perform at a very special New York City event on Friday, April 13 at The Metropolitan Museum of Art. The event, presented by the Museum’s Spectrum Initiative, AN EVENING OF BASEBALL HISTORY AND MUSIC, honors the Met’s Jefferson R. Burdick Collection of more than thirty thousand baseball cards dating from 1887 to 1959. The evening concert will follow a book signing by Bill Rhoden of his book Forty Million Dollar Slaves: The Rise, Fall, and Redemption of the Black Athlete and a panel discussion about the card collection and its relationship to baseball with Rhoden, retired Major League Baseball player Dale Murphy, Syracuse Post-Standard columnist and book author Sean Kirst and Sharon Robinson, author, educational consultant and daughter of the great Jackie Robinson.

The Baseball Project has written a new song especially for the event about Burdick and his treasure trove of cards, and will perform it for the first time during this special night.

“We are proud to take part in the Met’s event celebrating the collection and commemorating the historic breaking of the color barrier in major league baseball,” said The Baseball Project’s Scott McCaughey.

“Jefferson R. Burdick’s collection represents a sort of holy grail of baseball card collections. Not only is the famed Honus Wagner card included, but an astounding array of others. Burdick was an incredible character, a selfless obsessive who collected for the sake of providing historical context for the history of printed matter in the U.S. His collection is worth millions but he donated it to the Met, and then spent 15 years cataloging it on site!”

Peter’s Rickenbacker guitar is one of many iconic guitars featured in Pat Graham’s most recent book Instrument which was released earlier this year. For more than ten years, Graham has been documenting instruments played by members of The Smiths, Sonic Youth, The Flaming Lips, R.E.M., New Order, Wire, Fugazi, Built to Spill, Band of Horses, Modest Mouse, Yeah Yeah Yeahs, and many more. According to the book’s description at Chronicle Books, “Pat Graham’s photographs capture the intimate relationship between musician and instrument told by the signs of wear of fingers on frets or keys, chips, scratches, and modifications by the artists who have played, beaten on, bled over, and made them their own.”

Find out more at one of these links:

Thanks to our friend Jordan Stepp for posting this homage to covers by R.E.M. at Athens Music Junkie.

This coming Tuesday, April 10, a strong cast of Athens musicians will gather at the Georgia Theatre on Lumpkin Street to perform songs by

Find out more about the show and the cause at the Facebook page. We would like to encourage everyone to come out for what promises to be a really fun evening in support of a very worthy cause.

ROUNDUP OF NEWS ON DOWNTOWN ATHENS AND PROPOSED DEVELOPMENT

Here’s a roundup of some of the most recent articles on the ongoing dialogue over proposed big box development near downtown Athens: