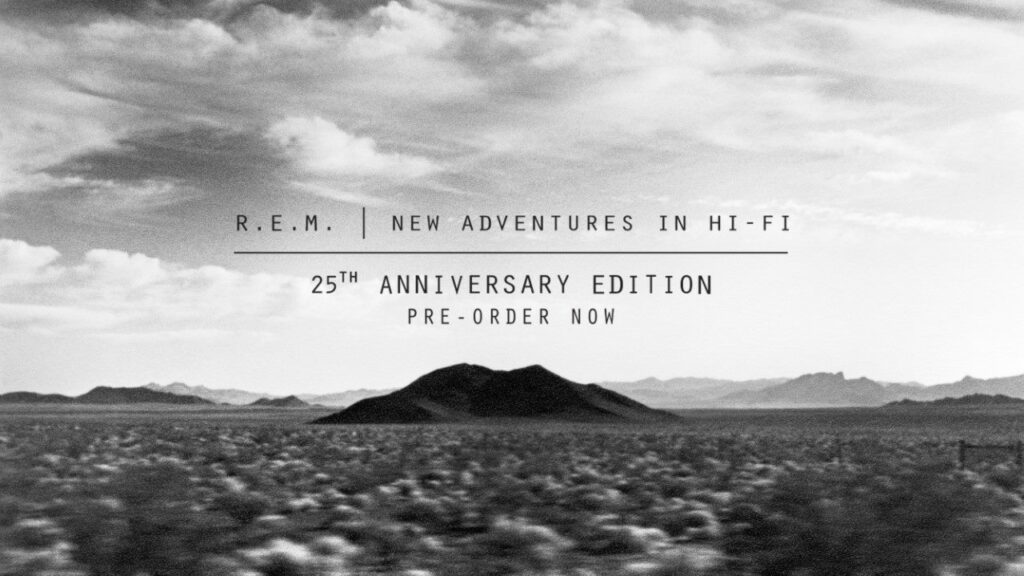 Los Angeles, CA (August 24, 2021)—Craft Recordings proudly celebrates the 25th anniversary of R.E.M.’s tenth studio album, New Adventures in Hi-Fi, with a special reissue, available for pre-order today and set for release on October 29. The bonus-filled 2-CD/1-Blu-ray Deluxe Edition offers a trove of audio-visual content, including the newly remastered album, 13 B-sides and rarities, a never-before-released 64-minute outdoor projection film (shown on buildings across five cities in 1996 to promote the album’s original release), and a previously unreleased 30-minute EPK. Additionally, the Blu-ray features New Adventures in Hi-Fi in stunning Hi-Res and 5.1 Surround Sound audio, plus five HD-restored music videos including “Bittersweet Me,” “Electrolite,” and “E-Bow the Letter.” Housed in a 52-page hardcover book, the collection includes archival photographs—many of which have never been published—plus new liner notes from journalist Mark Blackwell and reflections from all four original band members, as well as from Patti Smith, Thom Yorke, and producer Scott Litt.

An Expanded Edition is also available as a 2-CD or digital collection, including the remastered album along with B-sides and rarities. The 2-CD offers an exclusive 24” x 24” poster and four collectible postcards, as well as a booklet featuring new liner notes and archival photos. Additionally, the newly remastered album will be available as a 2-LP set, pressed on 180-gram vinyl, with lacquers cut by Kevin Gray at Cohearent Audio. Fans can preview all physical formats via the official unboxing trailer here.  A limited-edition pressing on clear and black marbled vinyl is also available exclusively at R.E.M.’s official store (limited to 1,000 worldwide), along with special New Adventures in Hi-Fi merchandise.

Available via digital platforms today, ahead of the album, is the advance single “Leave – Alternate Version.” Originally recorded for the A Life Less Ordinary soundtrack, the single offers a haunting, sparse, siren-less version of New Adventures album track “Leave,” for which Michael Stipe re-recorded the vocals. Reflects Stipe, “I actually might prefer this version to the one that’s on the record… Well, I wouldn’t say I prefer it, it just tells a different story with the lyric.” Fans can stream or download the single now, and pre-save the album.

First released in September 1996, New Adventures in Hi-Fi endures as one of R.E.M.’s most acclaimed albums and stands as a favorite among band members and fans alike. The album was a global success, achieving platinum certification in the US and peaking at No.2 on the Billboard 200. Elsewhere, the album went to No.1 in more than a dozen countries, including Australia, the UK, and Canada. Critically, New Adventures in Hi-Fi received wide praise and was named as one of the best albums of the year by such outlets as Rolling Stone, Spin, Mojo, Entertainment Weekly, and the NME. Over the decades, the title has achieved cult status, with several press retrospectives ranking it among the top albums in R.E.M.’s rich catalog of releases.

Recorded at the height of their fame, New Adventures in Hi-Fi also marks R.E.M.’s final album with drummer and founding member Bill Berry, who left the group amicably the following year. Perhaps most remarkable, however, is that the album found the band taking a unique creative approach: writing and recording much of the LP on the road, during their 1995 Monster tour.

While writing new material on the road wasn’t an unusual feat for R.E.M., New Adventures was unlike anything they had done before. As they embarked on tour, the band sought to create an abstract travelogue documenting every emotion and experience as it happened. “We wanted to make a record about being on the road without singing about being on the road,” bassist Mike Mills explains in the liner notes. “The idea was that the feeling of being on the road would come through in the sound and feel of the record itself.”

The band traveled with a mobile recording truck, capturing new songs on an 8-track during soundchecks (as well as in various backstage areas and on the tour bus). “The idea was, ‘Let’s challenge ourselves,’” guitarist Peter Buck tells Blackwell. “My feeling was, it’ll show exactly where we’re at right now in a way that maybe some of the records don’t at all. This record was just an attempt to be who we were at that minute.”

The year-long outing, which began in January 1995, marked R.E.M.’s first tour in six years. As one of the biggest bands in the world, the quartet played to packed arenas across North America, Europe, Australia, and Japan, with support from acts like Sonic Youth and Radiohead. But along the way, the tour was marred by medical emergencies. In March, Berry collapsed on stage from an aneurism and spent the next month recuperating. Mills, meanwhile, underwent intestinal surgery in June. A month later, Stipe had emergency surgery for a hernia (which, he asserts, occurred while performing the song, “Undertow”).

After the band returned from the eventful—yet highly successful—run of dates, they entered the studio with their longtime producer, Scott Litt, to record a few final tracks and put finishing touches on others. Among them was the epic, seven-minute-long “Leave;” “E-Bow the Letter,” featuring backing vocals from the legendary singer-songwriter Patti Smith; “New Test Leper,” which Buck proclaims is his favorite R.E.M. song; and “How the West Was Won and Where It Got Us,” one of several songs on the album inspired by Stipe’s experiences living in Los Angeles.

Upon its release, New Adventures in Hi-Fi marked R.E.M.’s longest studio album, with a total run-time of 65 minutes. Filled with cinematic storytelling, haunting effects, and dissonant notes, New Adventures in Hi-Fi found R.E.M. exploring diverse sonic territories—particularly in songs like “Low Desert,” which, Berry describes, is “just dusty and kind of slow and it’s swampy…I feel isolated when I listen to that song, but it’s a good thing.” Stipe adds that the song offers such questions as, “‘What are we doing in the desert? What are we doing in the American West? What are we doing in this unlivable, uninhabitable place?’” Other tracks, like “Departure” and “The Wake-Up Bomb” deliver classic R.E.M. rock vibes.

The band looks back on New Adventures in Hi-Fi with great pride. Buck, perhaps, sums it up best. “Most records, you go in the studio and you just do ’em. And years later all you really remember is vaguely where you stayed, and the songs and the recording process. But this one I remember every bit of it. It was an experience. It was f**king tough, but we made a record. And it was as challenging as anything I’ve ever done.”

Click here to pre-order New Adventures in Hi-Fi on 2-CD/1-Blu-Ray, 2-CD or 2-LP, or to stream the single and pre-save the deluxe digital album.

Having established a powerful legacy as one of the most enduring and essential rock bands in popular music history, R.E.M. pioneered the alt-rock movement of the ’90s, influencing the likes of Radiohead, Nirvana, Pavement, and Pearl Jam. Formed in 1980, the group enjoyed an extraordinary three-decade-long run of creative vitality and multi-platinum sales before amicably disbanding in 2011. Despite great success, the band members never lost track of their core values—remaining outspoken in their views about political, social, and environmental issues, and never wavering when it came to artistic integrity. Throughout the course of their career together, R.E.M. released a total of 15 studio albums, won three GRAMMY® Awards, and were inducted into the Rock and Roll Hall of Fame in 2007.

Craft Recordings is home to one of the largest and most essential collections of master recordings and compositions in the world. Its storied repertoire includes landmark releases from icons such as Joan Baez, John Coltrane, Creedence Clearwater Revival, Celia Cruz, Miles Davis, Isaac Hayes, John Lee Hooker, Little Richard, R.E.M., Joan Sebastian, and Traveling Wilburys. Plus, the catalog recordings of celebrated contemporary acts including A Day to Remember, Evanescence, Alison Krauss, Nine Inch Nails, Taking Back Sunday and Violent Femmes, to name just a few. Renowned imprints with catalogs issued under the Craft banner include Fania, Fantasy, Fearless, Musart, Nitro, Panart, Prestige, Riverside, Rounder, Specialty, Stax, Vanguard, Varèse Sarabande, Vee-Jay and Victory, among many others. Craft creates thoughtfully curated packages, with a meticulous devotion to quality and a commitment to preservation—ensuring that these recordings endure for new generations to discover. Craft is also home to the Billie Holiday and Tammy Wynette estates which preserve and protect their respective names, likeness and music through day-to-day legacy management of these cultural trailblazers.