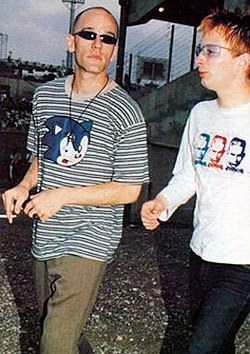 It was twenty years ago today: R.E.M.’s only show ever in Israel. Security was tight. First time for that kind of stuff for us. Mike and Peter had been to Israel three years earlier for promo for Automatic. They’d visited the Dead Sea. We saw a Ben and Jerry’s on the beach and thought that was funny. Radiohead supported. It was quite a night and truly unforgettable. Places like Catania and Tel Aviv were the first time we had done a “bonus week” at the end of a normal tour in Europe— a way to get to places not really routable into a normal run of dates for reasons of logistics and geography.

Thanks to the R.E.M. Timeline for show details:

set: I Took Your Name / What’s The Frequency, Kenneth? / Crush With Eyeliner / Fall On Me / The Wake-Up Bomb / Half A World Away / Undertow / Turn You Inside-Out / Tongue / Bang And Blame / Strange Currencies / Revolution / Country Feedback / Man On The Moon / Losing My Religion / Departure / Orange Crush / Finest Worksong / Get Up / Star 69

R.E.M. HQ @remhq
1 day ago
UP ⬆️, R.E.M.'s 11th studio album, was released on this day in 1998. The album was produced by Pat McCarthy and yielded four singles including "Daysleeper," "Lotus," "At My Most Beautiful" and "Suspicion."