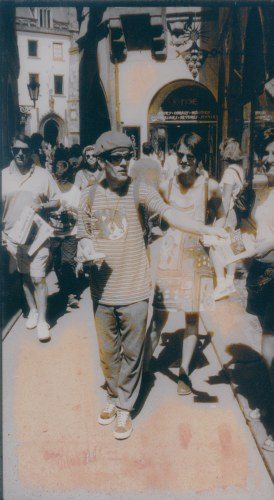 August 11, 1995: It was twenty years ago today: the third time really was a charm. After postponements occasioned by Bill’s brain surgery in March and Mike’s gut surgery in July, R.E.M. FINALLY got to play their show in Prague (although Michael was not exactly feeling fine during the show); one of my favorite photographs at REMHQ is the one of Michael leafleting in Prague trying to get the word out we really are in Prague to play a show . . . despite earlier foibles. What a year that was, and I was relieved to get the Prague show in so Bill and Peter did not have to activate their plan to head for the border in the event of a third cancellation.

The R.E.M. Timeline provides the details:

notes: In the soundcheck, the band work out a new song (‘Away’), in which Michael comes in at the end of the first take, with rudimentary lyrics, with the chorus ‘run away’. The next run through, Mike sings. This song remains unreleased. Multiple takes of ‘The Wake-Up Bomb’ were done as they were rehearsing it for the MTV Video Music Awards, followed by a work out of ‘Binky The Doormat’ in which Michael is still working on the lyrics. After ‘Binky The Doormat’, Michael went off to rest his voice. The rest of the band then played a short version of ‘White Tornado’!, before launching into ‘What’s The Frequency, Kenneth?’