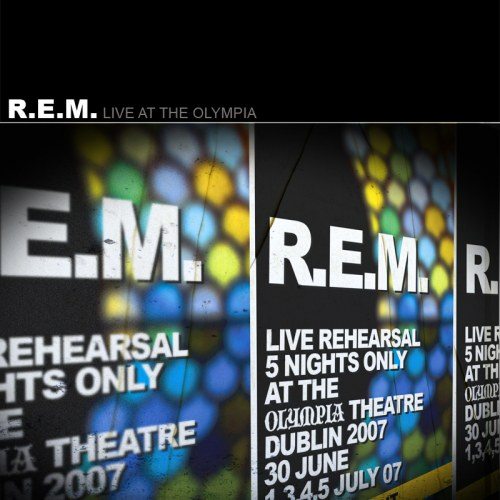 As we approach the Independence Day holiday weekend here in the States, our thoughts can’t help but harken back (somewhat ironically) to Dublin where exactly two years ago, the band spent five nights at the venerable Olympia Theatre rehearsing new songs for what would eventually become ACCELERATE while also rolling out a dizzying array of older numbers, including the four tunes that comprise the soon-to-be released digital E.P. RECKONING SONGS FROM THE OLYMPIA (available at iTunes and other digital outlets on July 7th). Harborcoat, one of the tracks from the Jacknife Lee-produced E.P., is currently streaming on the site (check out the link by clicking the Harborcoat banner on your right). If you like what you hear, you can pre-order a copy at iTunes for the low price of $3.99.

Of course all of this leads up to the fact that in October Warner will be releasing R.E.M. LIVE FROM THE OLYMPIA, a special 2-CD set featuring songs from the aforementioned five-night stint in Dublin. The double CD will come in various packages and is expected to included 30-plus songs. More on this release in the coming weeks.

Reviews of the Reckoning Deluxe Edition continue to hit the web, and we’ve collected a few of the more recent ones just below (including a five-star review by Uncut Magazine and a highly-prized top re-issue mention at Pitchfork). We’ll continue to update this post as more reviews come forth, so check back from time to time.

Other items of interest:

Fuse.tv is currently holding a contest in which they are giving away copies of the deluxe editions of Murmur and Reckoning as well as autographed album artwork.

Our U.K. readers will be pleased to learn that Reckoning Songs From The Olympia is available to premium subscribers at spotify.com. Find out more about this very nice offer HERE.

As we mentioned earlier in the week, liner notes for the “RDE,” written by R.E.M. historian Tony Fletcher, are available for download HERE. Tony’s insight on the band during the early days is indispensable. The art and graphics, if we do say so ourselves, are pretty cool too.

Finally, we would be remiss if we didn’t mention that it’s the 10th anniversary of the band’s website, REMHQ.COM, and we thank you for helping us celebrate it by being here today. Who knew at the time back in 1999 that the self-proclaimed “last band in the world to start a website” would have come so far in its embrace of such a seemingly esoteric technology! We hope you have enjoyed the first ten years as much as we have; stick around for more fun (and for a worthwhile look back in time at the various incarnations and the gradual metamorphosis of remhq.com, check out this link at waybackmachine).

Reviews of the Deluxe Edition and “Reckoning Songs”:

In the News UK