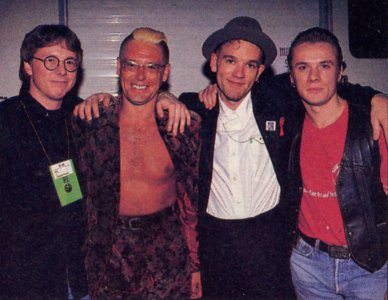 Michael really loved the song “One” from Achtung Baby, and I remember him humming it, singing it, playing it in the car all through Miami while they were recording Automatic for the People. Months later Mike and Michael found themselves in Washington, DC and so did Larry and Adam—Bill Clinton’s first inauguration—a much different and hopeful time, January 1993.

We were all excited about MTV’s first (and only) Inaugural Ball because of the appearance by the 10,000 Maniacs; Michael was going to sing a couple of songs as duets with Natalie, to “Sir with Love” and “These are Days.” So Michael was already kind of in performance mode and a late night piano session at the Tabard Inn led to a phone call the next day to the U2 people and some key MTV folks, and eventually a rehearsal space in a convention center late the next afternoon. Our only condition with MTV was that there be no buildup or announcement that it was happening, just a simple “Ladies and gentlemen, Automatic Baby” and they would play the one acoustic song. Dennis Miller delivered the line and needless to say for the next four minutes, the guys nailed it with a haunting version of that mournful but ultimately hopeful song. Even in the pre-Twitter, pre-Facebook, heck pre-Internet world at least to us, the performance created quite a slow but powerful stir among all the fans of the bands and perhaps beyond, for a minute. Plus it was really fun, the element of surprise of course! It remains for me a singular highlight among a career of being around and involved in highlights, many of which included or were centered on the two guys from Dublin and their two bandmates.