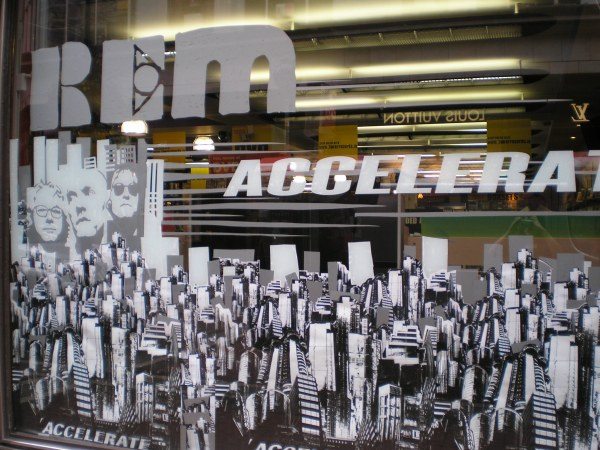 Some (but, by no means, all) of the highlights of ACCELERATE week 1:

As Bertis stated in his tour de force postcard from the end of the promotour, the Wednesday APPEARANCE ON THE COLBERT REPORT was perhaps, in many ways, the coup de grace of the tour and ranks up there somewhere near the top of the band’s mythic “if we could only do one show this would be it” list. THAT GOOD.

That, of course, in no way diminishes the earlier appearances this week which were stellar in their own right. The band had a great time at ROCKLINE, so big thanks are due to Bob Coburn who interviewed the band and graciously played ACCELERATE in its entirety. Thanks also to the fantastic crew at TODAY who, along with the big crowd in Rockefeller Plaza, braved the cold and the early morning, to enjoy a strong three-song set that included Hollow Man, Losing My Religion, and Supernatural Superserious.

It’s early in the charts’ game but ACCELERATE is currently #1 at iTunes and #1 at Amazon in the USA.

Finally, be sure, as mentioned in the previous post, to check out CBS’ The Early Show tomorrow morning for a slimmed-down version of last week’s thoughtful feature piece on the band from CBS Sunday Morning.