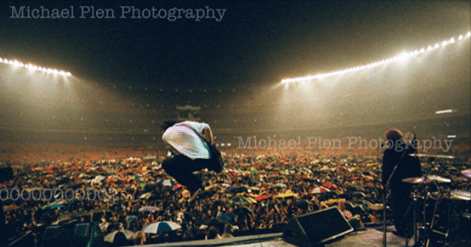 Here’s a story behind the photograph, as told by the photographer Michael Plen, our dear old friend and the guy who got R.E.M. on the radio in those early IRS days:

“My mom had just returned from Japan with a super cool lens that didn’t distort. I took it that next night to Shea. I was working with IRS Records & The Police camp, so they graciously let me shoot with the look out to the fans. REM were always moving. Michael’s stillness and gesturing , Bill’s whiplash drums, Mike’s dancing, and of course flying’ Peter Buck. He could have easily landed at Laguardia airport nearby with that move. It was a moment that grasped the breadth of how big REM were becoming by playing the massive Shea, but they’d already arrived. Their magnetism of pulling off playing this mighty show is still unforgettable.”