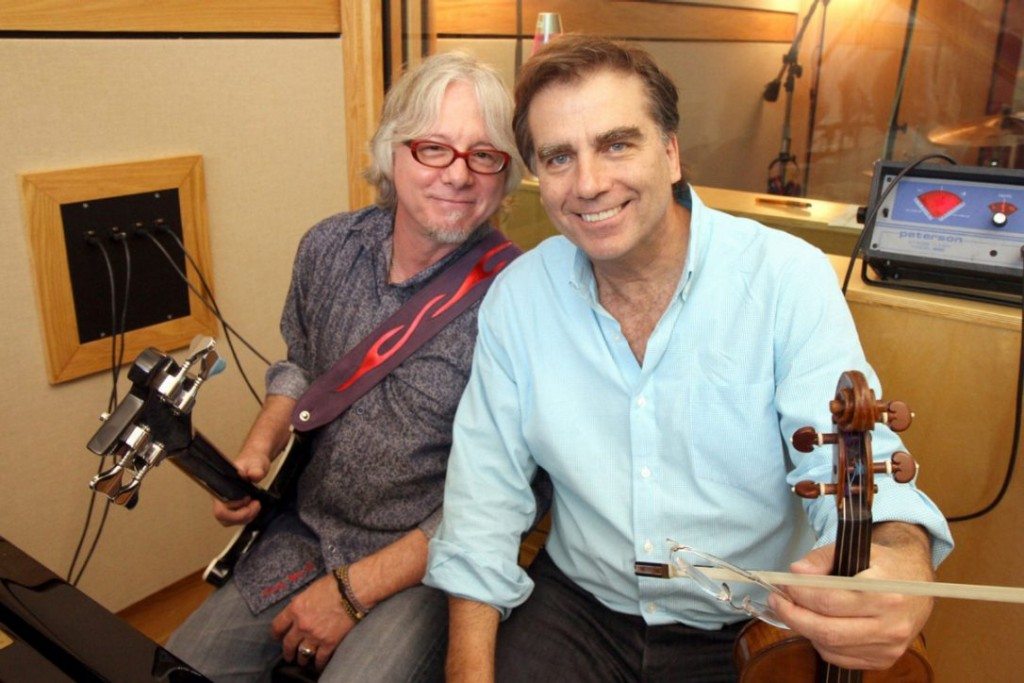 Concerto for Violin, Rock Band and String Orchestra, the first-ever classical work composed and performed by R.E.M. bassist and songwriter Mike Mills, is set for its recorded release October 14 on Orange Mountain Music. Mills composed the piece for his longtime friend and new musical collaborator, critically acclaimed violinist Robert McDuffie, with whom Mills has been close since the two grew up up together in Macon, GA. The pair is joined on the recording by the McDuffie Center for Strings Ensemble conducted by Ward Stare, made up of students from the award-winning Robert McDuffie Center for Strings at Mercer University.

About the piece Mills says, “It is a pleasure and an honor to have composed and to perform this amazing project alongside my old friend Bobby, whose imagination and encouragement got the whole thing off the ground in the first place. I can’t wait to see where it takes us.”

“Mike has created a beautiful and joyful concerto,” McDuffie adds. “It’s a work that goes straight to your heart, and by the end you’ll want to dance and move to the South. I’m delighted and honored (and a bit nervous!) to be making music and sharing the stage with Mike and his amazing colleagues. It’s going to be an awesome ride.”

Concerto for Violin, Rock Band and String Orchestra received its world premiere in June, performed by Mills and McDuffie alongside the Toronto Symphony Orchestra. The pair also performed the piece in Rome, and on August 11 Mills will make his first ever appearance at the Aspen Music Festival while McDuffie makes his 40th to perform the Concerto. Mills and McDuffie will then be joined by Chicago’s critically hailed innovative chamber orchestra Fifth House Ensemble (17 strings) for a U.S. tour of the piece beginning on October 20 in Miami, produced by Columbia Artists Management LLC (CAMI). See below for a complete list of upcoming dates.

The concerto, with orchestration and additional music by David Mallamud, features McDuffie performing on violin; a four-member rock band led by composer Mills (performing on bass and keyboard) with two electric guitarists and a drummer; and a string orchestra. The Toronto Star hailed the piece’s world debut as “a winning way to introduce symphony to a new generation.”

Mills—the son of a tenor who sang on “The Ed Sullivan Show” and in the Naval Aviation Choir—is a founding member of ground-breaking alternative rock group R.E.M. and a member of the Rock and Roll Hall of Fame. He first crossed paths with McDuffie when the pair were growing up in Macon, where Mills’ parents were in the choir of the First Presbyterian Church and McDuffie’s mother was the music director.

McDuffie is a Juilliard-trained, Grammy-nominated violinist who has appeared as a soloist with numerous major internationally-acclaimed orchestras including the New York and Los Angeles Philharmonics; the Chicago, San Francisco and National Symphonies; and the Philadelphia, Cleveland and Minnesota Orchestras. McDuffie will tour throughout 2017 with the Bruckner Orchestra Linz, performing the Barber Violin Concerto and Philip Glass’ American Four Seasons.

The Fifth House Ensemble has been praised by The New York Times for its “conviction, authority and finesse.” The group recently celebrated their tenth anniversary season with landmark performances of Black Violet: The Un-Natural Order, written and illustrated by Ezra Claytan Daniels; Soundings, pairing Dan Visconti’s new trio for flute, cello and piano with works by Stacy Garrop and Jennifer Higdon; Journey, an interactive arrangement of Austin Wintory’s Grammy-nominated score responsive to live game play; and Voices from the Dust Bowl, a collaboration with the bluegrass group Henhouse Prowlers.