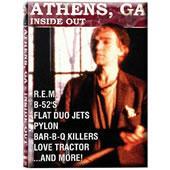 With AthFest taking place over the course of the next five days (June 21st-25th), our humble burg readies itself for an interesting few days of music, arts, and other cultural happenings as temperatures soar into the upper 90s. One of several highly-anticipated events is a 20th anniversary screening of highlights from seminal Athens-music scene film, Athens, Ga.-Inside/Out at the 40 Watt Club by Producer Bil Cody at 8pm. Cody’s screening will also include scenes from Two-Headed Cow, a documentary about Dexter Romweber of the Flat Duo Jets, which Cody produced alongside Director Tony Gayton (Athens, Ga.-Inside/Out ).

Check out the Athens Banner Herald which has an article that nicely summarizes the films and offers more details about the event, which precedes Sprockets Music and Video Show. Click here for more information.

When: Tonight at 8; Sprockets starts at 10

Cost: $5; free with AthFest wristband and for Film::Athens members