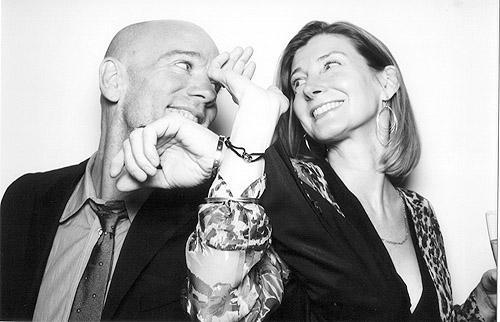 Michael attended a fundraiser in New York City last night which was hosted by venerable French jeweler and watchmaker Cartier. The event, “Celebrate Love,” brought attention to Cartier’s partnership with some of America’s best-known artists who were selected for their “commitment” to a specific cause. Michael represented Mercy Corps’ Gulf Coast Recovery agency:

Last night was the gala cartier event in nyc. I went representing MERCY CORPS/GULF COAST RECOVERY as a follow-up to the IN THE SUN FOUNDATION of last year. Cartier, alongside interview magazine relaunched their LOVE jewelry line and chose 8 people who represent “commitment” in the year 2006.

After the red carpet, which was pretty chock-a-block, I got inside to a glass of champagne and a packed party with a supercool photo booth that projected shots right on the wall and everybody picking up their LOVE bracelets. I’ve been to many events like this in nyc and beyond, but I really have to say I was so proud to be a part of last night’s events. It’s awesome that a giant company like cartier are committed to raising much needed cash and awareness for the issues and organizations that were represented here, and putting their clout and cash where their mouth is. I havent seen this type of commitment since I worked with reebok in the 90’s on human rights. I came away very impressed.

It was a super high profile evening, after cocktails we moved to the roof for dinner, and I saw and spoke to spike lee [we did conan o’brien a thousand years ago and he is left handed and super smart]. Spike said he’s releasing a documentary about the gulf coast post-katrina, to coincide with katrina’s one year anniversary. He was seated next to janet jackson who is very nice.

I sat next to ana from the scissor sisters and across from jake shears. I’ve known jake through mutual friends[like casey spooner who was there with chloe sevigny] but had never met ana. She’s really cool and I met the rest of the scissors too. They’re about to tour europe.

Also there at our table was donna karan who is awesome and brilliant and talked a lot about africa, helena christensen, iman, liv tyler and roy langdon who I love. Ed norton who I love, and scarlett johansson who is super cool, and was working with usa harvest, a great organization that we’ve supported in the past; the usa harvest guy asked me to send a big hello to mike and bertis, who he worked closely with. And behind us sarah j. parker, michael patrick king, and salma hayek.

Edward, salma, scarlett, spike, liv, sarah j. and ashley judd [who spoke beautifully in a speech when acknowledged by ingrid sischy] were the other recipients of cartier and interview’s largesse, each person receiving donations for their various causes. Cartier made a huge initial donation to each organization, and with the subsequent sale of each bracelet are committing $100 to one of the eight organizations. You can get more details about the various causes and the LOVE bracelet by going to www.love.cartier.com.

Jeff koons, julien schnabel and his amazing wife olatz, lindsey lohan were also there. The incredible angela mccluskey sang a beautiful song at the end of the meal with her husband paul playing violin accompaniment, and cindy lauper sang “true colors” a capello and put her arm around my neck for the chorus which was super cool.

It’s unusual to be in such company and have the focus be on political action and commitment to important causes; it was refreshing, and I think a very positive signal that activism was the real star of the evening. A huge shout out to ingrid sischy and sandy brant from interview, and to frederic de narp from cartier for pulling off such a great launch and great event.