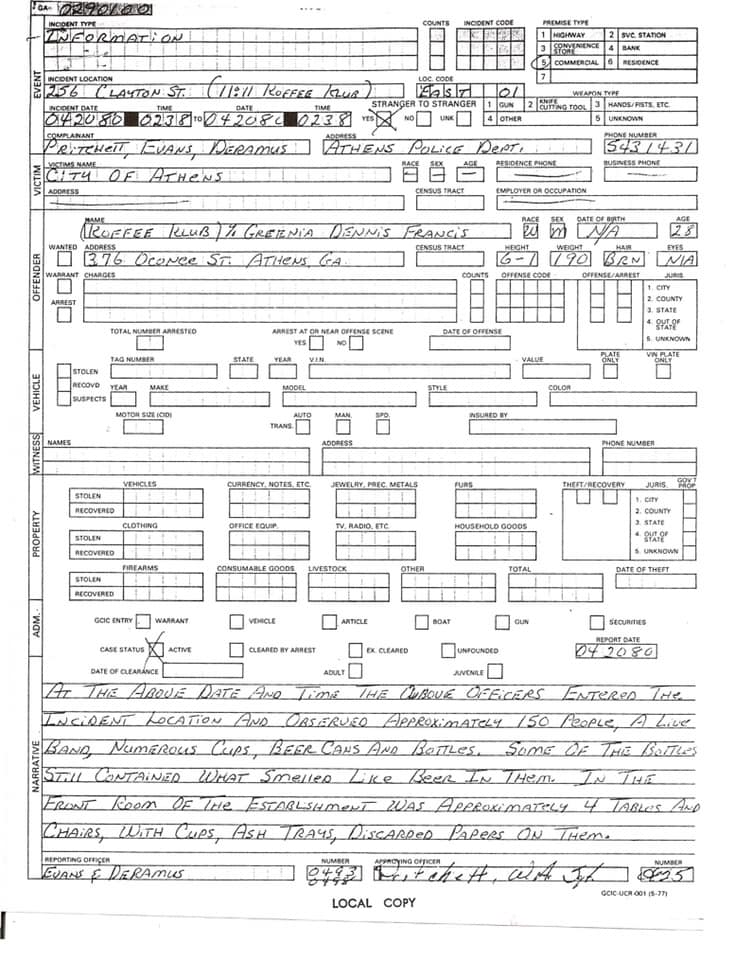 This morning, a friend sent me a reference to the first time R.E.M. ever played as R.E.M., on April 19, 1980. He asked me if I was there. I answered that I was and that I remembered it like it was yesterday. Actually, what I clearly remember is mostly summed up in this quote from the article on a Good News In History website:

“42 years ago, R.E.M. played their first gig before 150 people at the 11:11 Koffee Club in Athens, Georgia. The show ended at 2 am when police closed it down due to their hometown venue being unlicensed.”

It was a fairly normal weekend toward the end of the year for me, a second-year law student at the University of Georgia School of Law. I had heard all about this band that included two of my friends, Bill Berry from the UGA Concert Committee and Peter Buck from Wuxtry downtown. They had played two weeks earlier at an abandoned church where all four of the guys lived at varying points during those months of an early 1980. So, I was intrigued by the handbill downtown announcing their show, with their brand new name, R.E.M., at a place called the Koffee Klub on Clayton Street in downtown Athens at 1:45 AM. There was no stage, just a bare floor, a very minimal sound set up, no lights other than the basics of things that would be in a house, and I went with a few law school friends including Russell Carter, a year older than me and far wiser on matters of rock ‘n’ roll music history (and future entertainment lawyer/manager of the Indigo Girls/founder of the 30A Festival, and many other things). He mentioned that the band seem to be playing lots of covers, songs like “Secret Agent Man,” something by the Troggs, maybe “Shake Some Action,” something by the Monkees, and then occasionally I would ask whether a given song was a cover or not and he would shrug and say no it must be one they wrote since he didn’t recognize it— I remarked that their originals, songs like “All The Right Friends,” “Dangerous Times,” “Different Girl,” “Narrator,” and “Just a Touch” were as good as the covers, all of them short, fast and rocking, and definitely tuneful.

Anyway, after about 45 minutes, the cops showed up, noticed that there was beer in various plastic cups, shut the whole thing down, threatening to arrest people and charging the organizer of the event, which was actually in an old print shop with “running a discotheque without a license.” They also took a bunch of Polaroid photos of audience members and got to hear some perhaps over served law students asking if they’d ever heard of the Fourth Amendment re search and seizure (see report). But eventually everyone dispersed since we had little choice, and they had made a good first, or second try at playing out live in town. And within a few weeks they were playing at the club Tyrone’s O.C. and the 40 Watt and a show supporting The Brains at the old Memorial Hall on the UGA campus, where they were all still students. They were off and running and 42 years later, it’s still good to remember those earliest times. 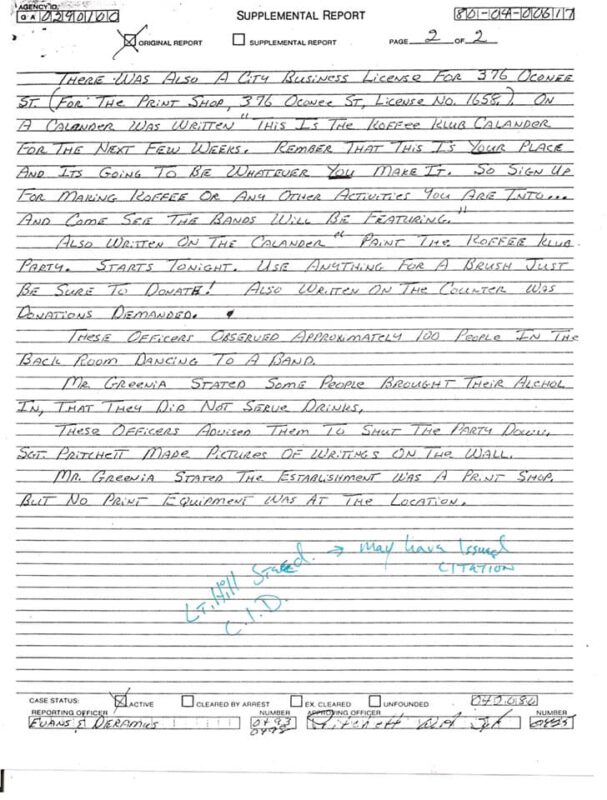