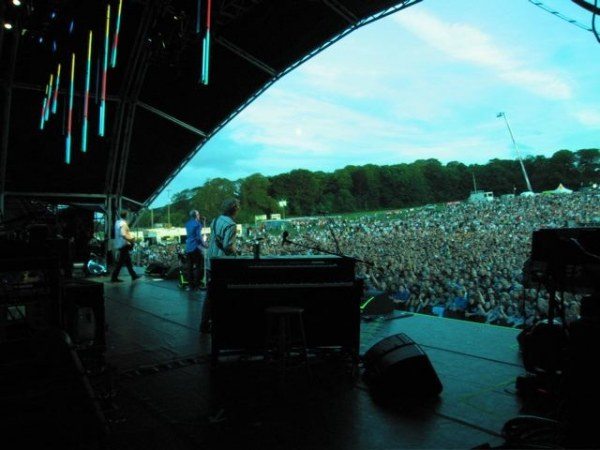 A few random Dublin memories from over the years, on my first day here this time:

Our first time here was 1984, the band’s second tour of Europe, back in the Reckoning days when that meant a few club shows where they could be arranged. SFX was the hall, and many Dublin friends over the years have told me they were there. Steve Wickham, with some ATL connection that resulted in him knowing Peter, opened with his band In Tua Nua, which showcased Steve’s virtuosic violin-playing. We stayed on the O’Connell Street side of the Liffey. I called my grandmother Downs, who always kept up with family history and I asked her whether we must have Irish blood since I felt so at home here. And I bought her some Irish linen, which she had always raved about but had never actually been to Ireland.

I don’t think we came back until 1989, when R.E.M. played the RDS, a facility most commonly used for equine purposes– sort of a big kwanset-hut type building. The U2 guys were in town and came to the show and there was a late show afterwards with Maria McKee of Lone Justice playing in an upstairs room. And while we were in town, we took in three amazing nights of the Waterboys at the Olympia Theatre, a perfect little music hall that was rapturous in its affection for the Scottish band (now including Steve Wickham) in their “more Irish thah the Irish” Fisherman’s Blues period. One of my all-time great memories anywhere.

In early fall, 1994, after 2 records of not touring, a 1995 on the road was ahead of us and for the pre-promotion, European division, we decided to do a couple of remote locations for press interviews: we took over a beautiful home at Luttrellstown and did dozens of interviews from there. A fairly painless way to do it, and with family around, as well as friends from Dublin, that was a great week of productivity and fun of course.

About a year later, Slane Castle was one of the more memorable shows on the challenging 1995 tour, as it was the 11th day after Mike’s abdominal surgery (optimistic recovery time from the German doctor before the operation: 10 days). The place deserves its legendary resonance, the day was amazing, and Mike gutted it out as the band played a tremendous set to a hillside full of fans from all over Ireland. Years later, the guys from the Thrills told me that Slane was their first concert as 14-15 year olds, and that it had really inspired them as a band.

1999 at Lansdowne Road, 2003 at Marlay Park, The Irish Awards show one of those years, the Reveal recording sessions in Dalkey near here . . .every time we come to Dublin, the shows are great, the friends fun to see, the families over from the states happy– just all around good feelings.

The 2005 tour had a couple of significant stops in Dublin: in February, we closed the European indoor leg of the winter tour with 2 nights at the Point Depot, and then in mid-June, the same weekend we played Old Trafford in Manchester and Loch Lomond in Scotland, R.E.M. played the most stunning setting yet: Ardgillan Castle up on the hill, the Irish Sea just behind the stage as the dusk settled on a riveting Sunday night set and another banner Irish trip.

And now, as part of the upcoming recording sessions in the mid-country, the band are ready to play all these nights at the Olympia for their most devoted fans–it should be some great times. Tickets are sold, songs are written, rehearsals are about underway, the time is upon us.

p.s. Dublin has too many highlights to mention, but two great places for tea: (upscale) Drawing Rooms at the Merrion Hotel; (normal scale) The Joy of Cha behind the Olympia