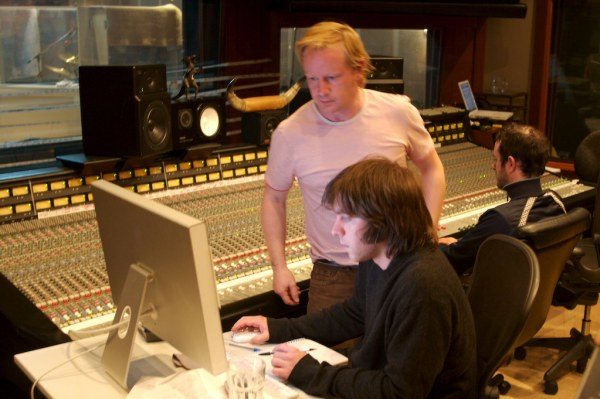 R.E.M HQ’s David Bell caught up with producer Jacknife Lee on the eve of the Dublin Olympia shows to discuss the Vancouver recording sessions, and many other things, including the Irish, Grouse Lodge, R.E.M.’s Working Rehearsal, the producer’s role, and Jacknife’s iPod:

1. How’s your summer been going up to this point Jacknife?

it’s been an odd summer. in england april was seriously hot and everyone hoped for a wonderfully warm season but it’s been schizophrenic weather since then – scorching, thunder, dark, rain, sunny. i don’t think i got much done either. i’ve mixed and remixed a few things, changed some lightbulbs, picked the kids up from school, groceries, answered emails and phone calls, worked on a website, played with the dog, bought some microphones… it all seems little fragmented so i’m confused as to whether i’ve done anything at all. i’m also building a studio so i’ve been looking at bricks and wood. i went to spain with some friends and lots of children. in may though i started work with R.E.M. in vancouver.

2. You’ve just released a solo record and launched jacknifelee.com. Clearly you’ve been really busy. Any plans to take the music on the road when recording work is done?

i’m always busy. i’m afraid not to be. the jacknife record didn’t take many days to do but it took years to complete as it’s always the thing that goes to the bottom of the list. the website is a sweet distraction. utterly meaningless and a completely lovely waste of time. i like it. my friend paul in boston put it together with me. i might but probably wont go on tour with it. touring is mostly a waste of time aside from the hour of the gig. i am not sure more than 20 people would show up anyway and it would be easier if they all came to me. i would prefer to make an album than go on tour. i’ve got a band with gary from snow patrol called Listen..Tanks! and we need to finish that recording. also Savile Robots, we’re very close to finishing that too.

3. You played in a band or two as you were coming up. What kinds of sounds and bands were you listening to back in the early days?

i’ve never done anything else. i’ve always played in bands, in fact the first band i had was when i was 12 in dublin was just me and Pat MaCarthy. i got into young marble giants when i was very young and pretty much ripped them off for years. kraftwerk, neu, slits, PIL, siouxsie, gang of four then later pixies, stereolab and miminal electronic music. so i’ve been going between noisy punk to gliches and bleeps for most of my life with little trips into pop.

4. Was there any big defining moment or influence during that time which convinced you that producing was your calling?

no, i’ve always dabbled and even managed to convince bands to let me produce them in the eighties. i’m still not sure if it is my calling. i would like to think that maybe bread making or even farming (which i’ve not tried yet). so i’m not convinced but i do it and mostly enjoy listening to the records i’ve been involved with. when we finished final straw (by snow patrol) and i handed over the masters i thought “that’s quite good actually”.

5. A couple of years ago you won 2 grammys for your production work with U2 and you’ve helmed some tremendous efforts by others before and after: Snow Patrol, Aqualung, Bloc Party, Editors, and now R.E.M.

Do you have a specific recording philosophy that you always apply, any ground rules, or is it more case by case?

case by case. never ever rules. the band usually define the parameters and tell me what is they want to achieve and i am there to help them get there. every record, artist and process is different.

i’ve been very lucky with the bands that have come to me. they’re all very strong and interesting people. not enough women though, aside from martha wainwright. i’ve got two children, both girls. we need more strong women writers like martha to get the men to shut up for a minute.

6. You spent three weeks during May in Vancouver, BC w/ R.E.M. Good times? Productive times?

of course. the studio (the armoury) was superb. vancouver is beautiful. we got a lot done and couldn’t have had a better start. very productive.

7. Is it an exciting prospect to work with R.E.M. on your home turf at Grouse Lodge? What’s the vibe like there? Can you give us a little background?

i’ve done a few records there. snow patrol (eyes open), bloc party’s and editors’ latest ones. i like it. it works, it sounds, great, it’s huge, it’s isolated, good food, beautiful buildings, great people, animals, freedom, guinness, no distractions and no other bands hanging around. it’s not a great place if you want to go to clubs after recording but if you want to record a drum kit in a field and live in a bubble (as i do) then it’s perfect. it’s run by a guy i knew when i was a kid (but i didn’t know that until i arrived there) and my family and his have become friends. it’s an odd and inspiring place.

8. When I had the good fortune of meeting Snow Patrol a few months back Gary Lightbody told me that you were The Patrol’s “oracle.” That’s stuck with me as a fascinating metaphor for the role of the producer, someone who not only offers sage counsel when it’s sought out, but in some strange sense channels the inspiration that ultimately becomes the sound.

How do you see yourself as a producer?

that’ll do. if an artist wants something i will get it for them. sometimes they don’t know how, forgot….whatever. i try and make whatever we do enjoyable.

9. Back to R.E.M. The upcoming 5-night stand working rehearsal has everyone intrigued. R.E.M. love the Irish and the Irish love R.E.M. No one is saying much of anything about the musical direction. Not that I expect you to spill the beans but do you think fans will have a lot to look forward to at the Olympia?

how could you not like the irish? (aside from the new london 1980s style cashcentric gluttons -). yes. new songs, old songs, lights, intimacy, mistakes, false starts and a band that probably hasn’t sounded as good.

10. Last question: What’s on your iPod these days?

clint mansell’s music from the fountain

editors – an end has a start

R.E.M. HQ @remhq
11 hours ago
UP ⬆️, R.E.M.'s 11th studio album, was released on this day in 1998. The album was produced by Pat McCarthy and yielded four singles including "Daysleeper," "Lotus," "At My Most Beautiful" and "Suspicion."