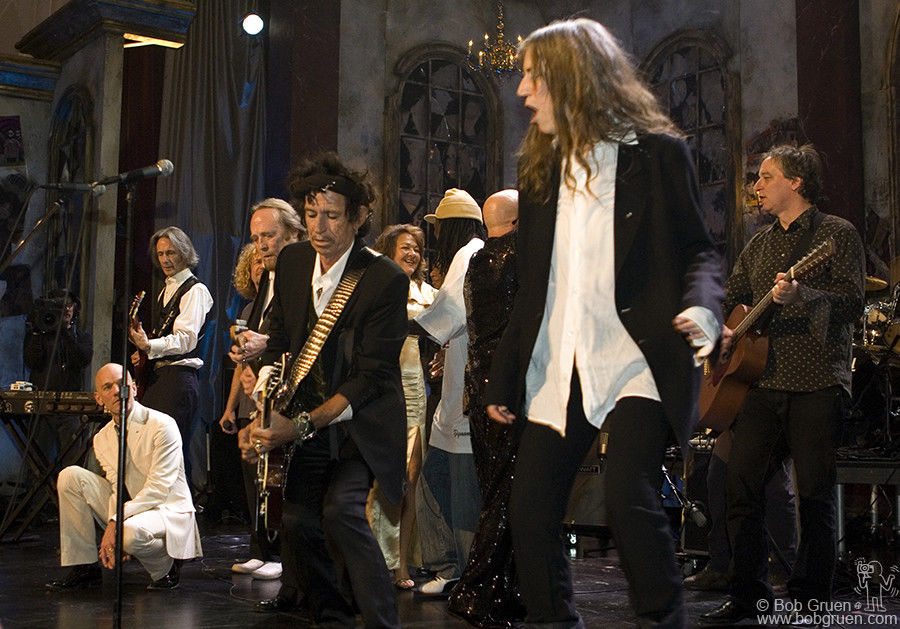 Help the Hoople Auction Update: Peter has donated his beloved Prada polka dot shirt, a mainstay from his wardrobe for ten years of touring with R.E.M. which, most notably, he wore at the band’s Rock ‘n’ Roll Hall of Fame induction ceremony in 2007:

“I bought it in about 1996 and wore it constantly on stage to the point where I was asked not to wear it every night,” said Peter.  “It was my favorite shirt for 10 years. It’s a shirt I’ve continued to wear since then.  There are thousands of photos of me out there in this shirt, the most famous of which is the photo of me, Keith Richards, Patti Smith and Eddie Vedder at the Rock Hall of Fame induction.  It’s time to let it go for a good cause.”

Proceeds from the sale will benefit Scott McCaughey and other musicians through the Jeremy Wilson Foundation, a non profit 501(C)3. Among their programs are the JWF Musicians’ Emergency Healthcare Fund, designed to assist individual musicians, or their dependents, when faced with a medical crisis.

This seller has a number of listings that exclusively benefit the JWF Musicians’ Emergency Healthcare Fund, including many signed guitars, posters and LPs by a wide variety of artists.

About the item: This french cuff Prada shirt, size Large, is a true piece of rock and roll memorabilia.

The shirt was worn by R.E.M. guitarist Peter Buck on stage numerous times, and it is shown here on Peter at the Rock and Roll Hall of Fame with Keith Richards, Patti Smith and Eddie Vedder. It’s a beautiful piece of clothing, and is 100% authentic, as it comes directly from Peter Buck for this auction to help benefit one of his friends and band mates, Scott McCaughey. A COA will be provided to the buyer.