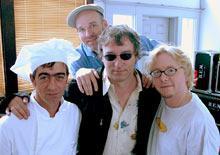 Bill dropped by rehearsals Wednesday and revealed that he has been doing alot more with his time of late than just farming and baling hay. Word has it that Bill has become a bona fide sushi chef (well, at least he looks like one) and to prove it, he wowed the band with his culinary talents. No word as to whether or not Bill will have his own show on the Food Channel. Stay tuned for details