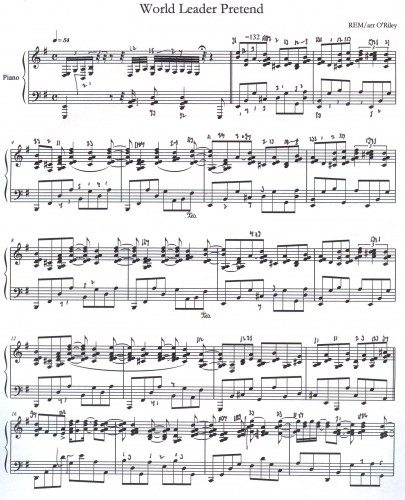 Christopher O’Riley, the super-talented concert pianist (noted for his classical arrangements and interpretations of songs by Radiohead, Elliott Smith, and Nick Drake among others) and host of National Public Radio’s From The Top has released an album called Out Of My Hands which includes a cover of R.E.M.’s “World Leader Pretend.” In support of his release, Chris is playing at the Highline Ballroom in New York City on Monday night and is expected to perform the R.E.M. song. According to Chris, the Highline concert is part of a larger Piano Series running for two weeks at the venue.

We caught up with Chris recently and asked him to describe what it is that compelled him to cover “World Leader Pretend”:

Ever since I’ve started getting the habit of doing songs as piano solos, I’ve wanted to do an R.E.M. song. I’ve been a fan for a very long time. Of course, the most anthemic and instantly covetable song for me was Finest Worksong, a piece that I wish was some kind of National Hymn, such is the feeling of wanting to stand and salute every time I hear it. Problem on the piano was, the notes themselves were, in their piano form, mere signposts, ghosts of the song; because of Peter’s incredible sense of sound-colour, the way he makes each song resound in one uniquely-designed sonority makes the notes almost superfluous to the timbre and ambience he creates. At the piano, I’m more comfortable working on songs that have a few threads for me to pull and weave into a piano sound-texture, so World Leader Pretend was a more natural choice: Mike’s descant to Michael’s lyric (always so compelling, to have great voices dove-tailing like that), the stunningly beautiful harmonies of the pedal-steel bridge, leading to the triumphant major-key verse iteration, and best of all, Mike’s fantastic piano part in that final verse. I ended up with a piano arrangement with a richness of texture that makes me wish I had a couple extra fingers to handle it all. And I especially enjoy trying to get Michael’s lyric phrasing true to form. They’re all in my head while I’m playing it.