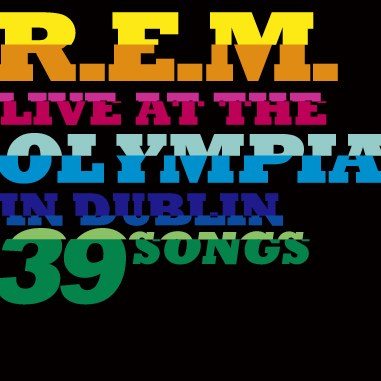 On October 26th, R.E.M. will release R.E.M. LIVE AT THE OLYMPIA, a two-CD set featuring 39 songs from the band’s acclaimed 2007 working rehearsals in Dublin, Ireland.

“Live At The Olympia” ventures back to the first week in July 2007, when R.E.M. set up camp at the venerable Olympia Theatre in Ireland’s capital city and tested new material over five nights before fired-up, capacity crowds comprised of fan club members, friends, family, and fans from all over the world who were party to R.E.M.’s so-called “experiment in terror.” “We were just trying to do something we hadn’t done before,” said guitarist Peter Buck, “which meant there was no relaxing during the set. Every second we were playing something we didn’t know all that well. Which was kind of good… there were all kinds of terror elements going on during that show.”

The music on “Live At The Olympia” was produced by Dublin native Jacknife Lee who, along with R.E.M., co-produced the band’s 14th studio album, ACCELERATE, which subsequently shot straight to number one in nine countries. Many of the eleven songs on ACCELERATE appeared in some form or fashion at the Dublin rehearsals, and R.E.M. LIVE AT THE OLYMPIA is an opportunity for fans to hear and experience those songs at one of the earliest stages in the developmental process.

In addition to the new material, the band also served up twenty-nine other songs, many of them rarely if ever played, culled mainly from the band’s storied IRS years, ranging from the 1982 e.p. Chronic Town to 1983’s Murmur up through 1988’s Document.

A special edition 2 CD & DVD set will contain a film of the Dublin shows by Vincent Moon and Jeremiah, who previously worked with R.E.M. on Ninetynights, Six Days, and the video for Supernatural Superserious. For more on the forthcoming release, fans should be sure to visit remdublin.com where audio for “Driver 8” is currently streaming.