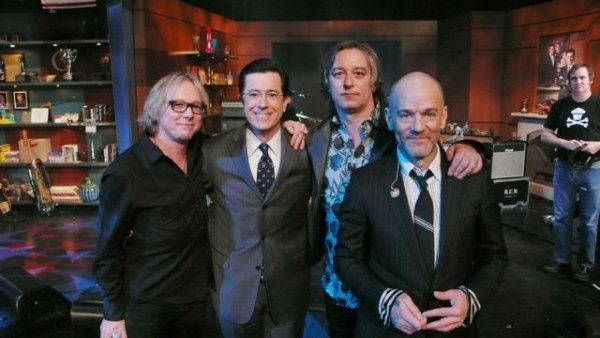 There is some news of special interest coming your way from this space on Monday so please stay tuned. Now to the news…

Earlier in the week, we mentioned the fantastic R.A. Miller exhibition opening at the Lyndon House in Athens on Saturday night. Evidently, R.E.M.’s Left of Reckoning, which appeared on Succumbs and most recently When The Light Is Mine is going to be playing on continuous loop in the Community Room during the opening. We’re so excited about it that we reached out to Left of Reckoning director Jim Herbert for his recollection of the day the film was shot on R.A. Miller’s property in Rabbittown:

The day the band and I went to R.A. Miller’s was dark and rainy with tornado warnings in the forecast. But we were all in good spirits and up for adventure. We didn’t have the faintest notion about what we were going to shoot other than we all loved R.A.’S whimsical, fantastical work and hoped to let it show us the way.

The highway makes a turn near Gainesville – and then we saw it: Up on the hill the wonder just spilling out for us! We came around the corner and the low dark sky was full of dazzling spinning whirling wonders: hundreds of propeller totems dancing in the clouds, the light and air choreographed by R. A. Miller.

The rest was easy. We filmed the dogs, the kids, the Guys – and that special moment when R.A. rises up from his studio shack like a friendly ghost – til night came and the wind died down to a whisper.

Bertis was also there that day, and here’s what he remembers:

My memories of the day with the whirligigs are somewhat sketchy–I guess it was 25 years ago according to the calendar!

I remember we drove over one Saturday with Jim Herbert, taking Highway 129 from Athens toward Arcade, Jefferson and Pendergrass (around there is where Wendell Gee sold cars from what I remember), arriving at R.A. Miller’s unprepossessing property and meeting the artist who was quite an impressive older gentleman with a sweet smile. A few minutes later, the guys and Jim disappeared over a hill, returning a half an hour later– and we were back in Athens within three hours of leaving and a few weeks later, we all went over to Jim Herbert’s to see what he had made– and were amazed to see this 20 minute film of the first side of Reckoning. At least that is how I think it happened, for the most part . . . things with Jim were always fast and a little chaotic but in a totally good way, and he made some of the band’s great visuals over many years. The stuff still stands up.

Anyway, that’s my story and I am sticking with it!

We were mystified (perhaps mortified), to say the least, by our local paper’s spin today on Comedy Central’s outstanding Colbert Report which, as the show’s namesake, Stephen Colbert himself, often cites, has won one of the University of Georgia’s coveted Peabody Awards for excellence in journalism. R.E.M., who coincidentally appeared on the report back on April 2nd, 2008, when Colbert won, unlike our local editorial page, most definitely supports Colbert in his quest for the next Peabody!

Mike contributed a song, Gift of the Fathers, for the film Favorite Son, directed by Howard Libov. The film has just been accepted into two more festivals… the Temecula Valley (CA) Film Festival, September 9-13… and the Kansas Film Festival (Overland Park, KS) September 18-24… Favorite Son won awards for Best Director and Best Cinematography in festivals earlier in the year, and is in distribution with Panorama Entertainment.

We saw this earlier in the week and thought it was pretty amazing. Talk about getting some deep, r.e.m. sleep!