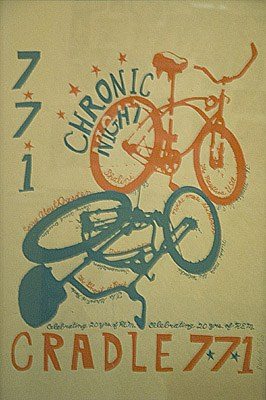 Today is the 25th anniversary of the release of Chronic Town, R.E.M.’s seminal five-song EP, recorded at Drive-In Studio in Winston-Salem, North Carolina, in October 1981. Chronic Town was produced by R.E.M. and MItch Easter (Let’s Active) who had previously worked with the band on the famous Hib-Tone single (Radio Free Europe b/w Sitting Still) and later on both the band’s first full length album, Murmur, and their sophomore offering, Reckoning. Chronic Town’s tracklist includes “1,000,000,” “Stumble,” “Wolves, Lower,” “Gardening At Night,” and “Carnival of Sorts (Boxcars).”

In September 1984, Peter Buck reflected on the band’s expectations for Chronic Town: “We weren’t really sure what was going to happen. We cut about seven or eight songs and we threw the kitchen sink in on everything–hundreds of guitars, backwards guitars, backwards vocals. It might not sound like it, but it’s a really busy record. We were looking for a claustrophobic effect, like your struggling into a world where you don’t know what’s going on, and you have to figure it out by using clues. It was a learning experience.”

While the band ultimately may have looked at the recording as a learning experience, the collective critical reaction was very positive and Chronic Town finished #2 in the year end Top Ten of the Village Voice Pazz and Jop EP Poll (scroll to bottom). R.E.M. had begun to define the sound which would soon take them to where no “college” band had gone before. In a matter of months, the band had teamed up with Easter again, recorded Murmur, and toured the world. The rest as they say is “history.”