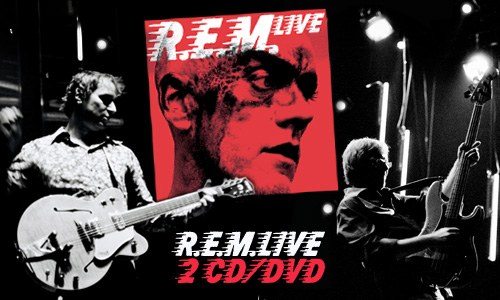 October 16th will see the release of R.E.M.’s first ever live CD/DVD in the course of a career that has spanned 27 remarkable years. The dual package, titled R.E.M. LIVE features 22 songs from the group’s memorable performance at the Point Theatre in Dublin on February 27th, 2005. R.E.M. LIVE was filmed by acclaimed director Blue Leach (Depeche Mode, Snow Patrol) who accompanied R.E.M. on their 116-date tour into 33 countries in 2005. Just two years earlier, Leach’s deft camera work and artistic video mix during R.E.M.’s Manchester Move Festival performance made a strong impression on the band. Here, Leach skillfully brings together his signature techniques to capture R.E.M. doing what they do best at one of the most celebrated venues on their 2005 worldwide tour.

R.E.M. LIVE features songs spanning the bandâs numerous studio albums, including rare performances of “I Took Your Name” (from 1994’s Monster) and “Ascent of Man” from the band’s most recent studio album (2004’s Around The Sun), as well as the singles â(Donât Go Back To) Rockville,â (featuring Mike Mills on vocals) from 1984âs Reckoning, “The Great Beyond” from the Man On The Moon soundtrack, “Imitation of Life” from 2001’s Reveal, and the previously unreleased crowd-pleaser and encore rave-up “I’m Gonna DJ.”

N.B.: R.E.M. LIVE is not to be confused with R.E.M.’s recent “non-shows” at the Olympia Theatre in Dublin (June 30th-July 5th 2007). The actual show with actual songs actually did happen in February 2005, and it remains sheer coincidence that it took place in Dublin other than the fact that when R.E.M. collides with Dublin, great things almost certainly will happen. For more on the Dublin connection, please visit remdublin.com

The track-listing for R.E.M. Live is as follows:

âI Wanted To Be Wrongâ

âThe One I Loveâ