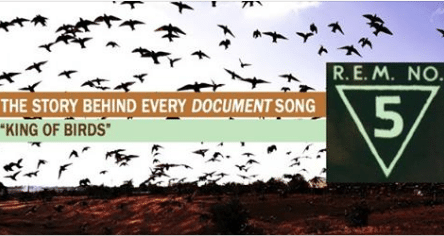 Diffuser’s excellent series on Document continues with a look at “King of Birds.”

Read an excerpt below and click the link for the full article:

Stipe’s feathered friends take flight in more than a few songs on the album, including “It’s the End of the World as We Know It (And I Feel Fine)” (“Birds and snakes”), “Lightnin’ Hopkins” (“Crow!”) and the animal-themed “Disturbance at the Heron House.” But they’re featured most prominently in Document’s penultimate track, “King of Birds.”