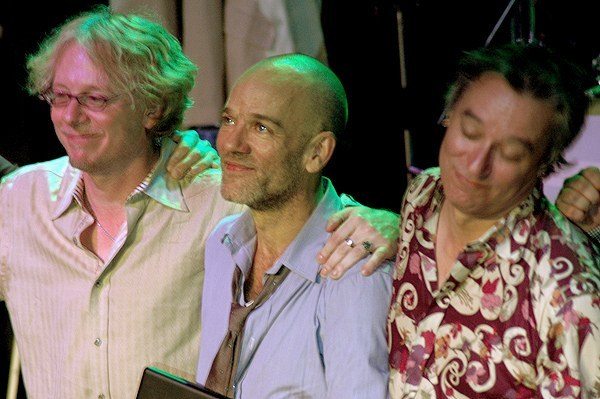 The grand experiment conducted by messrs. Buck, Mills, Stipe, McCaughey and Rieflin at the Olympia in Dublin, Ireland ended on an extremely high note tonight as the band turned in a tremendous performance full of highlights. There were so many memorable lines from Michael that it would be difficult to recount them all here (be sure to look to youtube.com for them), Peter’s patented flying kicks were on full display while Mike’s harmonies soared and have rarely sounded richer. Coupled with a heavy dose of audience participation, Guinness a plenty, not to mention the continued debut of the 11 new songs which, by week’s end sounded like classic R.E.M., this show, as Bertis said in his postcard from Dublin earlier today, was a “cracker” which will surely rank up there with one of the best in the band’s illustrious history.

Night five saw the band absolutely rip through such numbers as “Living Well is the Best Revenge,” “Staring Down the Barrel of the Middle Distance,” “Accelerate,” “Mr. Richards,” “Disguised” “Horse to Water,” “Man Size Wreath,” and “I’m Gonna DJ.” (My personal favorite, “Until the Day is Done,” is a beautiful ballad which rivals the gravitas of “Try Not to Breathe” and “Sweetness Follows” but channels the social urgency of such songs as “World Leader Pretend” and “Ignoreland.” Really amazing. Oh yeah, let’s not forget “On the Fly,” another beautiful tune). These are great songs and the audience knew them all by heart which was a really cool thing to see. It will be great to watch them (the songs, not the fans) evolve over the next few months and will be as interesting to see which ones make the new record.
<br>

Tonight’s “olive branches” included “Welcome to the Occupation,” “Cuyahoga,” “Pretty Persuasion,” “Gardening at Night”, (dedicated to Bertis) “West of the Fields,” “Second Guessing” (which opened the encore once again), and “Worst Joke Ever.”

At any rate, another amazing night from a band which seems to be on a mission. Another amazing crowd… The Working Rehearsals in Dublin were an unqualified success. Thanks to the Olympia, the fans, and the city of Dublin for making the band and the office feel at home this past week.

Now onward and upward as R.E.M. travels to West Meath for stage two of the recordings.