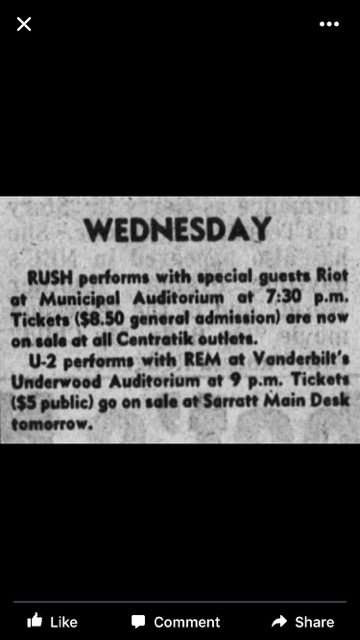 Thanks to Chris Hartsonge of the formidable The R.E.M. Timeline empire who found this press clip from late 1981 when, believe it or not, R.E.M. was slated to support U2 at Vanderbilt University in Nashville TN. Well, the show never happened as our guys were bumped for some reason, a good one we are sure, for an ATL opening band called The Roys, thus delaying the first time R.E.M. and U2 ever met for a few years (1985 at the legendary Torhout-Werchter Festival in Belgium) when R.E.M. was touring behind Fables of the Reconstruction and U2 had their album The Unforgettable Fire going strong. The funny thing is the U2/R.E.M. show (that never happened) still gets reported as historical fact, as recently as the last time U2 played Nashville:

That’s a far cry from the university’s long-gone Underwood Auditorium, where, on Dec. 2, 1981, the band, along with opening act R.E.M., played to a crowd of hundreds, who splurged a stiff $5 on tickets —

R.E.M. HQ @remhq
18 hours ago
April 1987: Recording sessions for Document continued in Nashville, TN at Sound Emporium. Among the tracks recorded was "The One I Love," soon to be the band's first top ten hit upon its release in August that year. Live version from Tourfilm, 1990.
https://t.co/epHKe9RTuw
View on Twitter
25
223