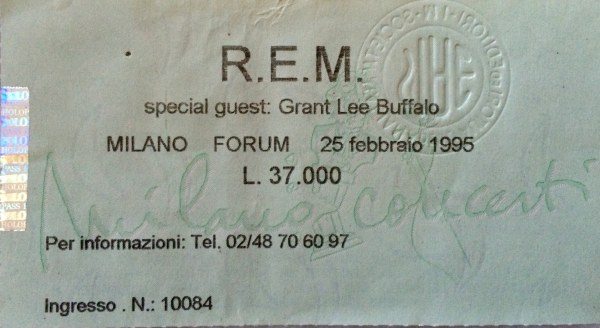 On February, 25th, 1995 I went to see R.E.M. playing the Assago Forum, near Milan. Imagine my surprise when I was at the concert of my favorite band, and they unexpectedly covered one of my favorite songs of that time.

I’ve always loved “Wicked game.” I’ve loved it ever since Chris Isaak originally released it in 1989, I loved it when I saw that black and white video that inspired (and was copied by) many other artists, I loved it when I heard it in David Lynch’s “Wild at Heart.” I loved it even more when R.E.M. sent their own version to fan club members, as a Christmas Single – but that happened only months later, in December 1995.

It’s a single that I played over and over – one of the best Xmas presents I ever received. On February 25th, 1995 I didn’t know the band was playing that song. R.E.M. were playing in Milan for the the first time in 6 years – and they had become so big to take over for two nights the 11.000 capacity Forum arena, as a part of a six nights, sold out Italian tour. They had played the smaller “Palatrussardi” in 1989 and they would play the Forum again in 2005.

But 1995 was their “Monster”, in-your-face, rock period. Arena rock at its best, indeed. Twenty years ago I had recently graduated and I was at the beginning of my career in music journalism. I had seen the band for the first time in 1989, but I didn’t manage to attend the acoustic show recorded for Italian TV in 1991, and I’d promised myself never to miss again R.E.M. in Italy. I went at the Turin show a few days before – it was near my hometown and it was the first big gig for which I got a press pass.

But Milan was different story. It was, and it is, the musical capital of Italy. Through the years, the band developed a great relation with the city – hey, in the REMTV dvd boxset there are three – 3!- concerts recorded in Milan, for the Italian branch of MTV. And those were the days before setlist.fm or social networks, so we had scarce news about songs played: I had only read a few reports from the opening of the tour, down under in Australia. The band had played “Wicked Game” a few days before in Spain, but I didn’t know that. I didn’t what to expect.

Certainly I didn’t expect to be blown away in that way. After the great (and sadly forgotten) Grant Lee Buffalo, the band came out and played a furious version of “What’s the frequency, Kenneth?” soon to be followed by one of my favorite songs ever, “Turn you inside out”. Michael was in full aggressive mode, almost hidden under a wool hat, shades and a furry jacket. Peter was building a wall of sound with its guitar. Mike had his typical nudie suit, and you could feel Bill’s presence from the pounding of his drums, coming from back right to your belly.

The night went on loudly, with just a few slow songs and few acoustic guitars. They threw in the set an unreleased song, “Revolution”: it would became one the centerpieces of “New adventures in Hi-fi”, a record the band was writing and recording during the rehearsals of that tour – but we didn’t know that yet. Everything was electric – the atmosphere, the audience. And the songs, too – I remember vividly a version of “Country Feedback” with a wonderful distorted final solo by Peter. If you want to hear how the band sounded at the that time, go watch “Road movie”, now.

And then came “Wicked Game” beautiful and haunting: at that moment Michael had tossed away his hat, his shades, his fur, while Peter carried on that infectious guitar melody. A wonderful way to close a concert, just before the usual party that was “It’s The End of the World.”

I went to see the band the following night in Milan. They played Bologna on the 27th. And then, on March 1st, Bill felt sick during the concert in Lausanne. Those who attended those shows felt lucky: to have seen the band at its best, and that Bill survived that aneurysm. We fans felt even more lucky when he came back to play in just a few months. With the aid of the late Francesco Virlinzi, the band came back in Italy and played in Catania in August, with Radiohead and local heroes Flor: I missed it and it was historic. But I hold dear that night in Milan: I listened many a time to “Wicked Games”, a CD bootleg I found sometime later. It’s one of the best concerts of R.E.M. I’ve seen – I count 21 of them.

And that version of “Wicked Game”: fortunately someone recorded it with a camera, and put it up on YouTube, so you can judge for yourself—¦

Gianni Sibilla is deputy editor of rockol.it, Italy’s biggest music site. He’s been a member of R.E.M.’s fan club since 1990, and listening to the band since 1986.