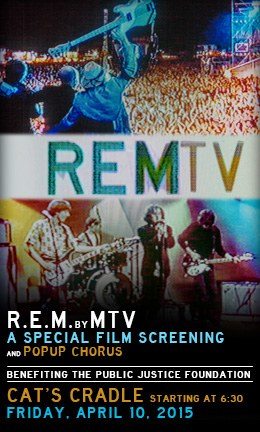 Join us for a special film screening of R.E.M. By MTV plus a PopUp Chorus of beloved R.E.M. songs benefitting the Public Justice Foundation at the Cat’s Cradle in Carrboro, NC, on April 10 at 6:30 PM.

Advance tickets are $15 and are available online now at catscradle.com. Seating is limited for this one-night engagement, so BUY your tickets NOW!

R.E.M. By MTV is Alexander Young’s acclaimed documentary tracing R.E.M.’s and MTV’s shared history over three decades and utilizes stunning live performances, many legendary award show highlights, and telling and entertaining interviews with Berry Buck Mills and Stipe from their earliest days as a band. Check out the film’s trailer @ npr.org

The event honors Chapel Hill attorney, teacher and policy advocate, Vivian Connell, a former Athenian who, while a student at UGA, photographed the band at one of their early benefit concerts, in Atlanta in 1984 (see below). Connell was diagnosed with ALS in 2014 but remains a tireless and passionate advocate for public justice and public education. Her blog is finALS: My Closing Arguments