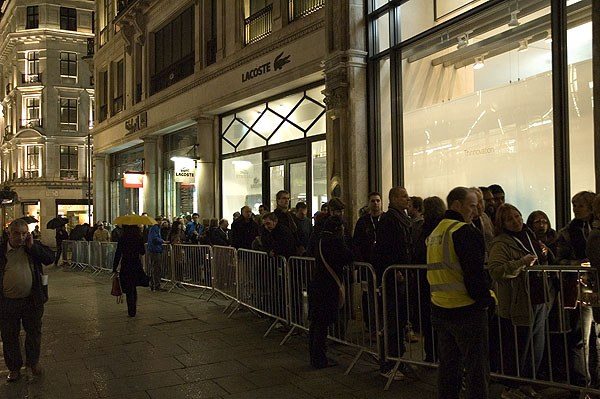 As promised, here is the final postcard for the day as the band closes out their whirlwind tour of London. The rain poured on Regent Street as the lucky fans lined up outside the Apple store. Inside, the guys prepared the setlist on a stage so small that it reminded them of their first gig in London. Michael proclaimed his love for his Mac (using the term iBoner) to the crowd of several hundred that managed to fit inside what turns out to be the largest APple store in the world. Despite the cramped location, the guys blistered through a 13 song set with the audience getting to vote on “the hit”, choosing either Losing My Religion or Man On The Moon (MOTM won.) A few old classics made the cut, including Auctioneer and West Of The Fields.

After the show, we bid farewell to the great staff at Apple and stepped back out into the drizzle and headed on. Next step, Germany!