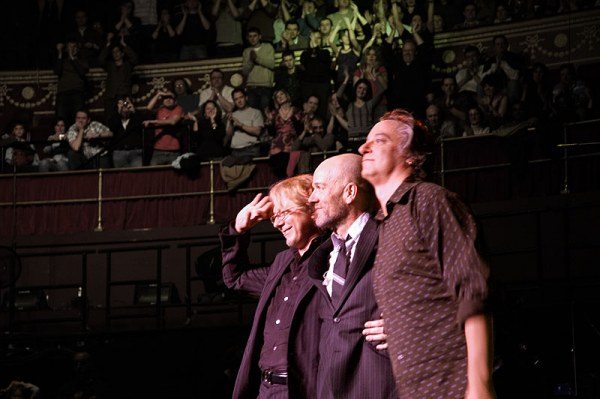 For those of us not fortunate enough to be at the RAH show in London last night, there was a great back up plan for punters from afar: the fantastic live stream of the show brought to you by the good people at BBC RADIO 2 (not to mention the cool twitter feed that provided up to the minute coverage of happenings on stage and behind the scenes)…this all happening while fans and the curious aLIKE were simultaneously tuning in to ACCELERATE at the iLIKE.com listening party which incidentally streams until ACCELERATE’s street date, March 31.

The RAH show sounded great through my desktop speakers, bigtime production thanks to Jacknife and Sam Bell, ACCELERATE maestros, who were tweaking the soundboard knobs, and did I mention that the new songs absolutely rocked? All in all, it was a fantastic night. I don’t think there was any question that the new material lived up to the hype…

“Living Well Is The Best Revenge”

“Until The Day Is Done”

“Man On The Moon”

Next up: the Apple in-store performance on Regent Street tomorrow. Evidently XFM will be streaming the Apple performance this weekend so please be sure to stay tuned. We’ll post those details as soon as we have them.

This year is off to a great start with Langerado, Stubbs, Austin City Limits, European promotional appearances, the ICA event, and last night’s show at the RAH giving fans a taste of what the ACCELERATE ’08 tour will be like. I know I can’t wait to see the guys live…

In the meantime, check out the following reviews of last night’s performance from some people who were actually there and enjoy the pictures from our man in London, Chris Bilheimer, most definitely there.

Don’t forget you can listen to last night’s show here: