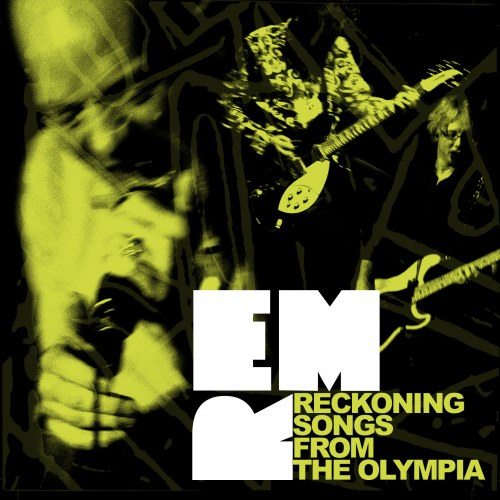 On July 7th, look for Reckoning Songs From The Olympia, a 4-song digital ep, available for download at iTunes and other online outlets. The Live release, which comes quickly on the heels of the Reckoning Deluxe Edition (released June 23rd), includes “Harborcoat,” “Letter Never Sent,” “Second Guessing,” and “Pretty Persuasion,” from the band’s Working Rehearsals at Dublin’s Olympia Theatre in July 2007. “Reckoning Songs From The Olympia,” will give fans a preview of R.E.M. LIVE AT THE OLYMPIA, a two CD-set scheduled for a Fall release.

Burbank, CA — R.E.M. will release a live digital EP, entitled Reckoning Songs From The Olympia, through iTunes and all digital service providers on July 7th, 2009.

The EP features live versions of four songs from the band’s beloved second album Reckoning that were recorded during R.E.M.’s “working rehearsals” at Dublin’s Olympia Theatre in July 2007. The track-listing is “Harborcoat,” “Letter Never Sent,” “Second Guessing,” and “Pretty Persuasion.”

The EP will give fans a preview of what’s to come when the band release R.E.M. Live At The Olympia as a two-CD set this fall. R.E.M., which is singer Michael Stipe, guitarist Peter Buck, and bassist Mike Mills, performed a special five-night residency — dubbed “working rehearsals” — at the fabled Irish venue to test out new songs for their 2008 studio album Accelerate, which was produced by Grammy-Award winning producer Jacknife Lee and topped multiple charts its first week of release.

Reckoning Songs From The Olympia comes on the heels of the 25th anniversary of Reckoning, which was released on April 9th, 1984. On June 23rd, the band released a deluxe edition of the album, featuring a bonus disc with eight of its 10 songs recorded live in Chicago in 1984, to celebrate the occasion.