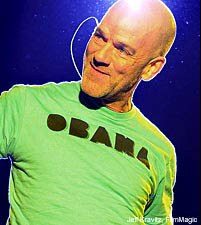 Here are some reviews of the band’s set at Langerado. Click on the links for the entire review.

“Michael Stipe is the man: There’s more to come in my review of REM’s passionate, weird, political and sexy show Saturday night (I’ll link it when it’s up). But I’ll just say that Athen’s own Spritely Elf of Alt Rock is ever better as a front man, because, 25-plus years after he started, he’s learned how to take himself less seriously while taking the music, the audience’s pleasure and his own passionate causes very seriously.

” The bandâs revitalization is most evident in Michael Stipe. Wearing an Obama shirt that he prevalently displayed amidst the sea of flashing camera lights, he sang with the passion of a 24 year old. “

From the Sun Sentinel

“R.E.M. was a band with a predicament going into Saturday nightâs show at Big Cypress Seminole Reservation.

Conscious of the pull of a glorious past, but eager to play new songs, these literate Southerners who midwifed the culture of alternative rock had sometimes contradictory tasks before them at the Langerado festival: Give the people what they want and know; and persuade them that new songs almost nobody has heard yet belong on the set list.