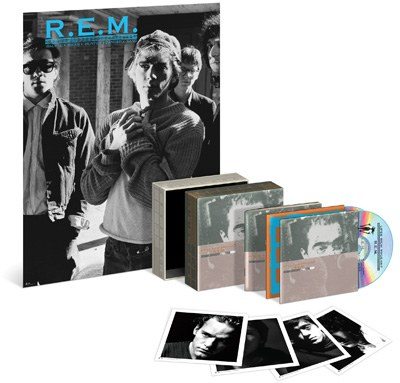 The 25th anniversary edition of Lifes Rich Pageant is out today, and for devotees of the band’s fourth record, you won’t want to miss the newly remastered version and the awesome extra disc, the Athens Demos (see full tracklisting at the bottom of this article).

The commemorative release also has all-new liner notes by music journalist and author Parke Puterbaugh, (download them here) with the 2CD package presented in a lift-top box with a poster and four postcards. The original album is also available on 180-gram vinyl in faithfully replicated LP packaging.

Produced by Don Gehman, Pageant includes the singles “Fall On Me” and “Superman.” The album was R.E.M.’s first to achieve Gold certification status, and it reached #21 on Billboard’s Top 200 Albums chart, the band’s then-highest chart position.

“The Athens Demos,” as the band has dubbed them, comprise the new edition’s second disc of 19 previously unreleased recordings, including drafts of Pageant’s 12 songs, plus additional demos of songs that were later recorded for other releases. Among them are early versions of “Bad Day,” “Rotary Ten,” “Two Steps Onward,” “Mystery To Me,” “All The Right Friends,” and “March Song (King Of Birds),” an early instrumental version of “King Of Birds” from Document. One track, “Wait,” has never before been officially released by R.E.M. in any form, but it has shown up on bootlegs over the years.

LISTEN TO I BELIEVE [THE ATHENS DEMOS]

Check out the full version of I BELIEVE here.

You can check out Spinner.com’s listening party as they stream the entire record here.

To commemorate the release of Pageant, Popmatters.com has compiled their picks for the top five videos from the band’s I.R.S. tenure. You can see what made the list here.

Dave.fm. will be highlighting R.E.M. all day. Listen here for their special coverage all day long and you may catch a few surprises.

Check out the videos for “Fall On Me” and “Swan Swan H” below as well as a vintage promotional interview with Peter and Mike from 1986:

Read UNCUT’s review of the deluxe edition and see why they name it their “Reissue of the Month” for August. Mojo says Lifes Rich Pageant “sounds not even slightly wearied by the quarter century that has elapsed since its release” in their review of the reissue.

Pitchfork.com reviews the reissue of Lifes Rich Pageant, as well as the LA Times.

7. The Flowers of Guatemala

6. Salsa (Underneath The Bunker)

18. All The Right Friends