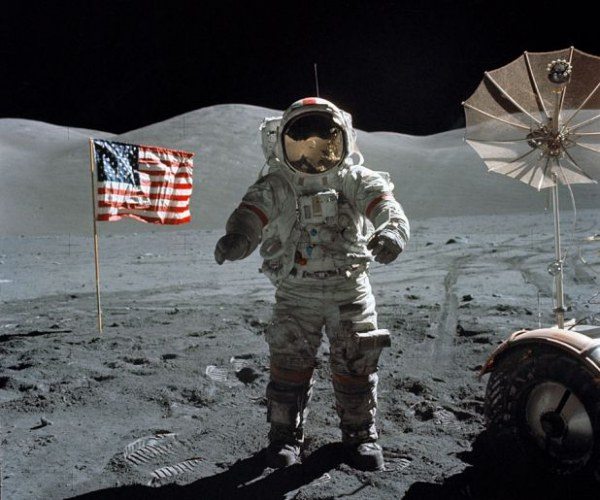 As most everyone probably knows, NASA’s space shuttle program is coming to a conclusion this year after a tremendous 30 year tenure. One of the great traditions of the NASA program is the astronaut wake-up call whereby astronauts are woken up with music at the beginning of their day’s activities in space. Given the fact that this is the shuttle’s last mission, NASA wanted to do something special as a send-off, so they enlisted the services of 4 world-renowned musical artists–Paul McCartney, Elton John, Beyonce, and R.E.M.–to provide wake-up call messages and music to the astronauts as they arise to begin their day’s work.

This morning, a message from Michael on behalf of the band, an a cappela chorus from Man on the Moon he recorded for the occasion, and the studio version of Man on the Moon were transmitted to space to the last shuttle crew as part of their morning wake-up songs.

As Bert Ulrich from NASA HQ so eloquently said, it is NASA’s hope that these songs by the four artists “will help all those inspired by the space program to deal with the sadness of the final mission” and that they “will also influence many to reflect more profoundly on the impact of the space shuttle program on humanity and the human achievement to transcend beyond the sky.”

Michael had the following to say about this historic experience:

“I recorded ‘Man On The Moon’ for NASA in Venice, Italy, where Galileo first presented to the Venician government his eight-power telescope, and in 1610 wrote ‘The Starry Messenger'(Sidereus Nuncius), an account of his early astronomical discoveries that altered forever our view of our place in the universe.” –Michael Stipe, July 2011

On behalf of Peter, Mike, Michael, Bill B, Bertis and all of us here at REMHQ, we wholeheartedly second Michael’s sentiments in wishing the astronauts of space shuttle Atlantis a successful mission! They Put A Man on the Moon!

UPDATE: Courtesy of NASA, listen to R.E.M.’s wake-up call to the shuttle and the hear the astronauts’ response from 200 miles above the earth.