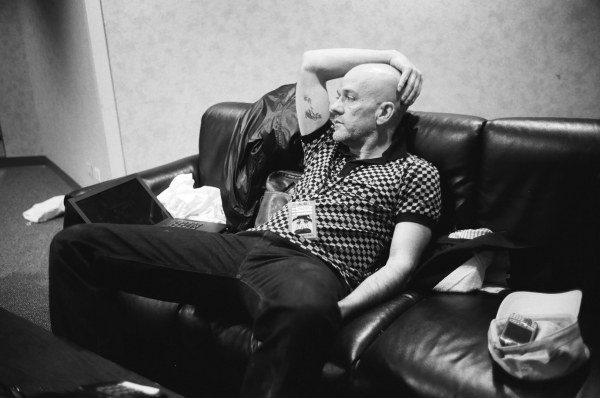 In this exclusive Q&A mirrored from R.E.M. fansite murmurs.com, Michael touches on the decision to reissue Two Times Intro: On The Road With Patti Smith after 15 years, what 15 years has done to him, art and photography and what’s next for his art practice.

What was the impetus for the re-issue of the book?

Michael: there were several people in publishing who had asked about the book and wondered why it had not been reissued. we found a great partner in akashic and started talking about printing it again. then ‘just kids’ exploded onto the international scene and our instinct proved right.

In the 15 years since the book’s release, how has your approach to photography changed?

MIchael: photography had become for me basically source material, a means to an end; although an experience with old pictures of the 20th century this month may change that back. in the early 21c. i realized that my eye had changed dramatically with the advent of digital photography, and with futurepicenter in 2007 i challenged that for myself by releasing an image a day for the year. i did a similar thing in 2009 which is viewable now on michaelstipe.com; looking at images which are only made of light and lit from behind. and allowing that to be your scrapbook or reference point, or journal. it’s very different experience visually than going to a lee friedlander or august sander exhibition. it’s important to say that 2x intro is not what i consider ‘fine photography’; it’s more reportage, illustrating a moment in time that was caught very quickly, and without an eye to reprinting it, simply as an illustrated journal or journal entry. that attitude is carried out in all of the above venues, it’s not casual by any stretch, but it’s not overly studied. it is an open book of ideas for me to draw from.

How is it looking back on 15 years ago with fresh eyes? 1996 was a very different time in politics, in music, etc.

Michael: there’s an updated introduction in the new 2x intro, by myself and patti, that discusses exactly this. it’s fascinating to see where she is now, with the worldwide success of ‘just kids’.

How is Fear of the Empty coming along? Any other interesting art projects in the works?

Michael: fear of the empty became a different project, there are a few images online that have hinted at this. i dont know when or if i will release another book of images or pictures, but i am basically doing that online anyway with futurepicenter then michaelstipe.com, and now confessionsofamichaelstipe.tumblr.com. i am still fascinated by magazines so the idea of releasing a book of images is really fresh. it could happen.

Click on the Patti Smith banner on the right to place a pre-order of the book.