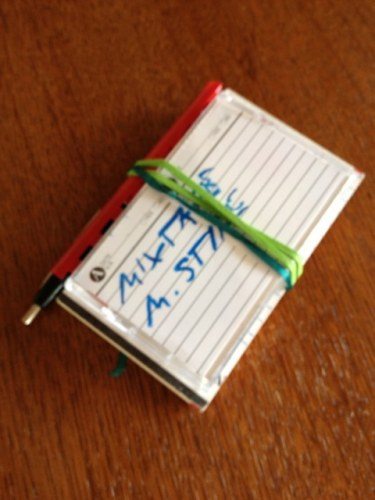 Michael has just finished his fourth haiku project with his friends and frequent collaborators Tom Gilroy and Jim Mckay. The Festival Of Writers Haiku Project follows in the footsteps of their books the haiku year and haiku, not bombs, and their blog 52haiku.blogspot.com.

Michael and four poets each wrote a haiku a day throughout April 2013–National Poetry Month–and collected them in identical notebooks made from discarded library catalog cards (see picture). The notebooks (and Michael’s cassette) were then all collected and wrapped in local material and placed in two ‘re-purposed’ (read; recycled) boxes to create an art-poetry object that was sold at auction, with all of the proceeds going to The Rensselaerville Library in upstate New York.

The new project is an outgrowth of that auctioned piece; a limited edition, letter-press Ã¢â¬Ërun’ of 200 packets of haiku printed on broadsides, designed by Shin Yu Pai and Johnny Brewster of X-Ray Press, who prints many of Tom Waits’s small letter-press projects.

There is an Indie Go-Go campaign for pre-orders of these very rare broadside packets, and on the site there is a short video piece which explains it in detail.

ALL of the proceeds go directly to the struggling Rennselaerville Library; if your order one you get a cool thing and you help a cool cause. Thanks!