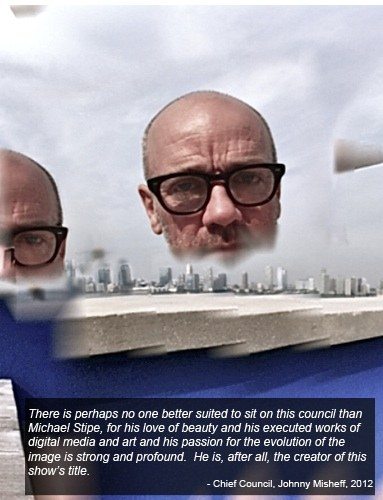 Michael is on a Selection Council made up of individuals from various creative enterprises and backgrounds who will each judge a specific category of submission in a digital arts festival called “Moving the Still.” The festival is the first large-scale, open call event of its kind for original GIF art. This inaugural competition will showcase animated GIFS as a new genre of digital art. The Festival is curated by Paddle8, a premier online destination for art collectors, and hosted on Tumblr, the world’s leading social blogging platform. Submissions are open and will be published on a rolling bases from October 17th through November 7th, culminating in a live exhibition during Miami Art Week 2012.

You can view Michael’s GIFs here.

Johnny Misheff will be serving as Chief Council Member working in close collaboration with Michael and the other judges who will select their favorite animated GIFs. Many of the submissions will be featured on the Moving The Still blog and shared with the entire Tumblr community and public.

For more information about the festival and to view a set of Michael’s GIFs go to movingthestill.paddle8.com.