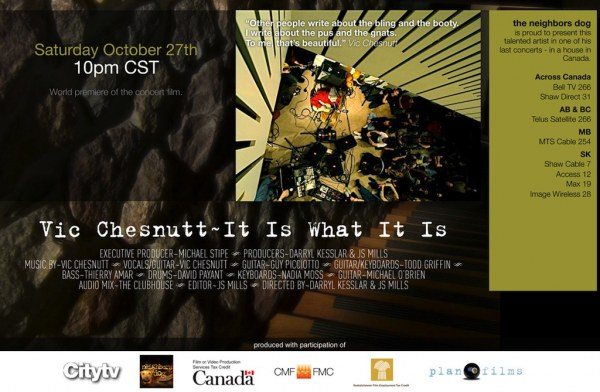 Vic Chesnutt performed one of his final shows Nov. 21, 2009, in a house in Canada. Vic Chesnutt – It Is What It Is is the document of that extraordinary evening. Filmed for the music series ‘the neighbors dog’, the concert took place in a unique, intimate, house concert setting and proved to be one of his final performances caught on film.

Almost three years since his passing, ‘the neighbors dog’ is proud to present a one hour television event exposing the immense and personal talent of singer, songwriter, poet, James Victor “Vic” Chesnuttt (November 12, 1964 — December 25, 2009). For the performance, Vic was joined by his friends and bandmates Guy Picciotto (Fugazi),Todd Griffin, members of Thee Silver Mt. Zion, Godspeed! You Black Emperor, Thierry Amar, Nadia Moss, David Payant, and Michael O’Brien. The program features a selection of songs from the house concert as well as an interview with Vic from the same night.

The 44-minute version of the concert show airs on October 27th in Canada, so please be sure to check listings in your area. Click here for more details.

Our very own Michael Stipe is the film’s executive producer.