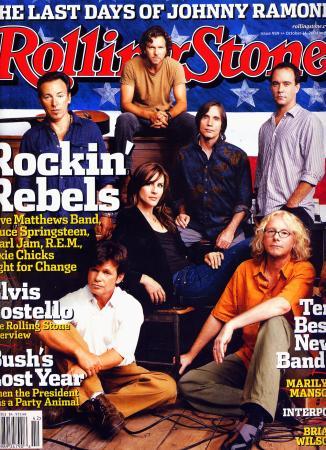 The newest issue of Rolling Stone, set to hit news stands in hours, features Mike Mills and a host of other artists who will be playing on the Vote For Change Tour. Michael was on the cover of the previous issue, a special devoted to the 50 Greatest Portraits in music. Go Team!

The Vote For Change Tour is a wake up call. We may alienate some fans over this. I don’t like that–I prefer to have music stand apart from political feelings. But this is so important, it’s worth it. If I piss a few people off, good. Because, frankly, I’m scared. Unlike a lot of political issues, this is literally life or death. Kerry understands how the world works, in a way that Bush does not. When Bush ran the first time, I realized something: I want my president to be smarter than I am. I don’t ask much, but I want him to be smarter than me.–Mike Mills in Rolling Stone