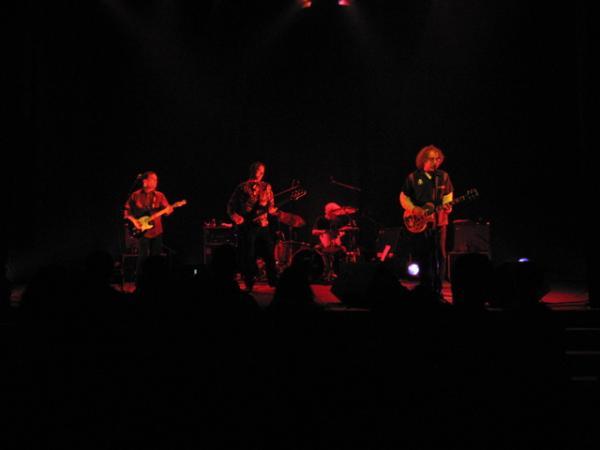 We left the hotel about 11:30, all stocked up with water and assorted munchies. Today we drive from Barcelona to Durango – a six hour drive, just like yesterday. Our Spanish hosts are in the front seats of the van listening to music; we’re in the back either reading (Scott, John, BIll), listening to music on an i-pod (Peter), or sleeping (Bob Weber). Peter has just finished reading the new Beatles book and has passed it on to me. So, it looks like the day’s excitement lies ahead of us.

We’re back in the van after a quick rest-stop-leg-stretcher where some refueled variously on coffee, cigarettes, orange juice and flavored bugles Two more hours to go on a drive that while as long as yesterday’s, seems longer today. The promise of an excellent dinner awaits us; a restaurant is attached to tonight’s venue. Right now, Kevin Ayers plays in the front of the van; I’m returning to the Beatles book…

After inquiring at a gas station, we finally arrive at the Gran Hotel in Durango where we check in and drop off the luggage. Bob & I then walk to the venue, just five minutes away. The bar/restaurant/venue has a very high stage on one end with steps leading up to it from the front — an unusual arrangement. Soundcheck is a relatively painless affair followed by a delicious dinner of Russian salad (which is not Russian) and turkey stew (which is not Turkish).

Note from Scott: At the club we talked to Jose, an R.E.M. fan whom
we’d met during our great stay in Granada back in May. Jose works
for a clothing company (Loreak Mendian) in San Sebastian and was
kind enough to bring nice new shirts for Bill and Peter and I. Thanks, Jose!
And now back to Bill…

We hit the stage at 10:30 leading off with the world-wide
smash hit ‘Ghost Tarts of Stockholm.’ At least, Scott told me it was
a world-wide smash hit; I know he would never lie to me. That’s what he said, anyway.

Things really started cooking about half-way through and much fun time was had. Unfortunately, something in my right hand twinged on the last song of the 2nd encore cutting short what could have been the longest show of our career (curfew wasn’t until 7 AM in the morning). So, while the others were saying hello and signing records, I was in the dressing room with my hand in an ice bucket.

Soon after, Peter and I walked back to the hotel in the brisk early morning air while John and Scott no doubt continued their good deed-doing, earning them a key to the city.

Back to Scott: Yes, good deeds were done as we heard a young woman folk singer in a tiny bar that was adorned with large color photos of imprisoned ETA members. ETA is the radical militant Basque separatist organization, somewhat the equivalent of the IRA. Our Spanish friends decided we should get the hell out of there after one beer!