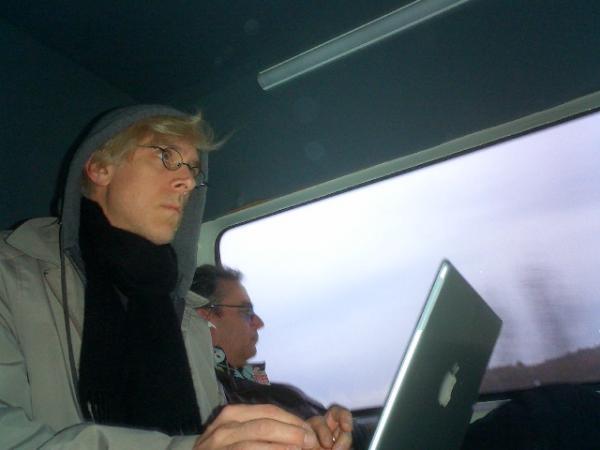 Once more, here we are, sitt now careens on the serpentine mountain road that takes us from Gijon to Madrid. Last night was the 5th and final night of the Minus 5 World Tour of Spain, 2005.

Once more, music plays from the front of the van, courtesy of our Spanish hosts; Peter is absorbed in his i-Pod listening to Arthur “Big Boy Crudup; John is reading ‘Careless Love – The Unmaking of Elvis Presley; meanwhile I’m feebly pecking away on Bob Weber’s computer like a stuttering monkey. Our fearless leader and moral compass Scott McCaughey (pronounced “muh-koy,” similar to the sound made while being punched in the stomach while eating an egg salad sandwich) is no longer with us. No, he isn’t dead, he has simply stayed behind; tomorrow he flies to London where he’ll be playing a show with Robyn Hitchcock. It IS possible, the morning after that show, that he’ll
wish he was dead. Or, maybe he’ll just take a few aspirin.

Last night’s M5 show was my 2nd favorite of the tour: the sound was good, the audience was gooder, and we played goodly. Scott was in usual (free) form between numbers and, typically, songs appeared that weren’t on the set-list. Toward the end of the evening the club was attempting to hustle us off the stage in order that, as Peter put it, people could stand around and watch someone play records instead of hearing real live music. Later, Scott managed to further annoy an already cranky club official by practicing a cider pouring technique unique to Spain. Granted, Scott is an amateur cider pourer. Nevertheless, I would think he’d be given SOME credit for attempting to participate in local culture. Instead, Grumpy Gus confiscated the cider bottle with disapproving looks. Scott, the undaunted optimist, was not distracted from his revelry.

This looks to be the final bit of activity from the M5 this year. Already, since the conclusion of the REM tour in July, we’ve completed recording the new M5 record, begun one with Robyn Hitchcock, and backed up Patti Smith (with Lenny Kaye). This, in amongst our usual Pacific Northwest shows, has kept the M5ers quite busy. And, two tours have already been booked for early 2006 with Robyn H. With loads more other stuff in the works including a record from John Ramberg and more Slow Music with Peter, me, and the rest of the Slow Team.

So, for now, adios from all of us, soon to return. Be afraid.
Be very afraid.