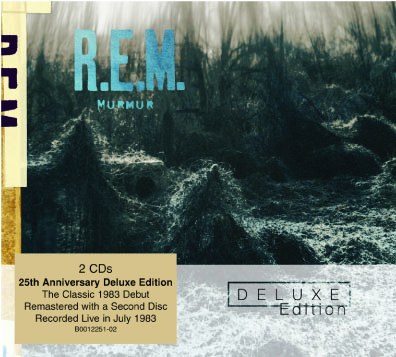 On November 25, 2008, the two-CD 25th Anniversary Deluxe Edition of Murmur will be released on Universal. The two-CD set features R.E.M.’s debut album, remastered, plus an additional disc with a previously unreleased concert recorded at Larryâs Hideaway in Toronto, three months after Murmurâs April 1983 release.

The 16-song live performance boasts nine of Murmurâs 12 songs, including âRadio Free Europe,” three songs from the Chronic Town EP, early renditions of “7 Chinese Bros.” and “Harborcoat,” as well as âJust A Touch,â eventually a track included on R.E.M.âs fourth album, 1986âs Lifes Rich Pageant. The live set also features a cover of the Velvet Undergroundâs âThere She Goes Again,â which R.E.M. recorded in the studio for the b-side of âRadio Free Europe.â

Stay tuned for more details and information on how you can pre-order Murmur–The Deluxe Edition. In the meantime, go to Pitchfork for their coverage, and have a look at the tracklisting below:

04 Talk About the Passion

12 West of the Fields

03 There She Goes Again

05 Talk About the Passion

12 West of the Fields