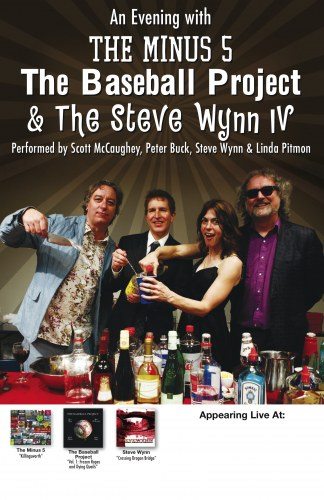 Peter, Scott McCaughey, Linda Pitmon, and Steve Wynn have just embarked upon an extensive TOUR of the U.S. and Canada that will take them from the Pacific Northwest to the Southeast over the course of 22 dates. The four of them will perform as three different bands: The Minus Five, The Baseball Project, and the Steve Wynn I.V. It promises to be a fantastic tour.

REMHQ had a chance to catch up with Steve Wynn as the band made the lengthy drive from Portland all the way to Lake Arrowhead for tonight’s show.

REMHQ: Steve, thanks for taking time from your busy rehearsals to catch up with us. Where are you guys at the moment and what’s the mood as you get ready to hit the road for two months?

SW: We’re driving through the beautiful Oregon countryside, having just passed a theme park called The Enchanted Forest. I hear it’s a freaky, surreal highlight of local off-road culture but there’s no time for that today. We have a long, long drive down to Lake Arrowhead where we’ll be playing tomorrow night. We had our first show yesterday in Portland and it was a blast. The set moves seamlessly between songs by The Baseball Project, Minus 5, Dream Syndicate, Young Fresh Fellows and my own solo stuff and it already feels like a cohesive show. The week of learning the (as of now) 50 songs in the basement studio has paid off.

Peter’s iPod is our current soundtrack, the Fifth Dimension is blasting from the speakers and even at 11am it feels like a good road party. I’m hoping an interesting and indigenous food stop is in the cards for the very near future.

REMHQ: Can you give us a little background on how The Baseball Project came together?

SW: The idea for the Baseball Project began at the night-before party for REM’s induction to the Rock and Roll Hall of Fame. We had all known each other over the years but I had no idea that Scott, like me, was such a baseball fan. It turned out that we both had been thinking about doing a record about baseball so it made sense to just do one together. We began mailing demos back and forth and went into the studio just a few months later. Peter and Linda were both excited about being involved and the record happened very quickly-I think the time span from the initial inspiration to us actually playing “Past Time” on David Letterman was less than a year.

REMHQ: Your upcoming tour will feature three bands: The Minus Five, The Baseball Project, and the Steve Wynn IV. This tour is unlike many tours in that the same four people will be in all three bands. That could well be a first but I suspect I’m wrong there. Without giving away too much, what can fans expect at these shows?

SW: We decided right away not to break the show into 3 different sets. It seems like more fun to just make it like one big band with a large and diverse choice of songs. We’re already up to 50 songs and I bet we’ll be adding to that list every night So, I think that every show will be very different. We’re having a great time playing together and we’ve got a lifetime of songs, inspiration, tall tales and bad jokes to tide us through the entire six weeks.

REMHQ: Peter mentioned to me recently that the last time you guys toured together was in 1984 when the Dream Syndicate toured with R.E.M. (ed. note: Peter played on Steve’s second solo record, 1992’s Dazzling Display), so for all intents and purposes it’s been 25 years since you were last on the road with each other. How does it feel to be working together again?

SW: It’s great. Peter and I first met in San Francisco after an REM show at the Kabuki Theater. I was making “Medicine Show” at the time and it was nice to break away from the pack for a night. Peter and I immediately hit it off and ended up hanging out and talking until the sun came up. Touring together in 1984 was really fun and I think I spent more time on the REM bus than I did on our own. We share a love for music, books, food and the nomadic lifestyle that we’ve adopted over the years. It’s nice to be on the road together again and on this first drive of the tour we’ve already talked about Lee Marvin, Jim Thompson, English breakfast road stops and bad 70s movies.

REMHQ: Your third-to-last show on the tour will be in Athens on September 28th. I was wondering if you could give me your thoughts on the music scene here as you’ve experienced it in the ’80s and ’90s and share any memories you may have of having played here.

SW: I loved Pylon’s records and I remember seeing them in Hollywood in 1981. They were amazing. And when I was working as an indie music buyer for the Rhino Record store I ordered a handful of copies of the first REM single for the store. I loved it and foisted it upon all of our regular customers. Over the years I’ve loved a lot of the Athens bands (and was a bandmate of Love Tractor’s Armistead Wellford for several years) and have had many memorable shows at the 40 Watt and Uptown. One in particular happened at the end of our 1984 tour with REM. We had a few days off in Athens and Peter was approached by the Uptown to fill a last-minute cancellation at the club. Peter had the idea of joining up with The Dream Syndicate for the night as Adolph and the Casuals, featuring Raoul. Pretty funny. We got 25 dollars of credit each at a local thrift store and an open tab at the bar. It was a wild show-I think we played “Ghostbusters” (a current hit at the time) three times that night.

<B>SW: Mike was a fantastic pinch hitter. It was an amazing show. We played in the middle of a beautiful old town in some kind of a castle in the open air. A very odd setting for a bunch of songs about baseball but the Spanish audience had a great time, even singing along with a bunch of the songs. Who would have thought that the first show by The Baseball Project would be in a Spanish castle. It’s always good to expect the unexpected.

REMHQ: Finally, if you were to make the lineup card, who would be hitting lead-off and who would be batting clean-up?

SW: I would lead off with Linda. She’s the youngest and pretty quick. Peter would definitely hit second-he’s wily, crafty, adaptable and could definitely move the runner along. I would take the third spot, I guess. I can hit to all fields but can still hit for power even this far along in my career. Cleanup? That would have to be McCaughey. He’s the veteran with the mighty swing. You just know that he’ll get the job done.

Now that you’ve read the interview, please be sure to stop by Stevewynn.net and check out Steve’s Myspace page. Steve will also be sending in regular blogs from the road, so check back often.