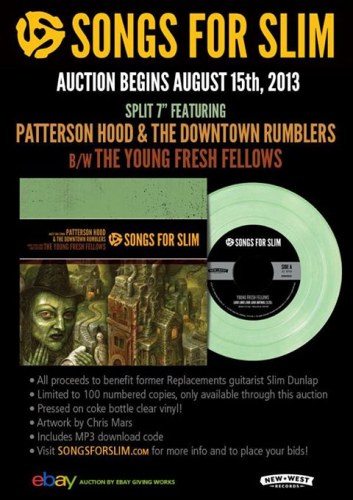 Patterson Hood (Drive-By Truckers) & The Downtown Rumblers and The Young Fresh Fellows (Scott McCaughey) make up the latest installment in the limited edition Songs for Slim 7-inch series, a non-profit project created to benefit former Replacements guitarist Slim Dunlap, who is still recovering from a massive stroke he suffered last year. The auction-only vinyl release is limited to 100 beautifully packaged, numbered, signed copies and features original Chris Mars artwork on the picture sleeve. The auction launches today, August 15 at 10 am PST via songsforslim.com and will run until August 22.

First up is a brilliant rendition by Patterson Hood of “Hate This Town,” one of the brightest gems in the Slim song catalog. Assisted by his Downtown Rumblers (DBT band mates Brad Morgan and Jay Gonzalez, Jacob Morris on cello and long-time DBT producer/partner in crime David Barbe on bass), “Hate This Town” was recorded in Athens, Ga. and produced by David Barbe. Hood, a long time fan of Minneapolis music, absolutely nails this one on the head, beautifully capturing the emotional complexities of the original, complete with a touching spoken tribute to Slim at the end that will make the hair on your arms stand up.

On the flip side is a spot on offering from Seattle’s alternative pop-rock pioneers The Young Fresh Fellows, who have been thrilling fans for the better part of three decades. Slim’s connection with this beloved band goes back to the late ’80s when The YFF teamed up with The Replacements for some now legendary shows in the Pacific Northwest. The current YFF lineup features Tad Hutchison, Jim Sangster, Kurt Bloch and Scott McCaughey, who previously appeared on the SFS Record Store Day single with The Minus Five. McCaughey and company tackle a real Slim rarity, “Loud Loud Loud Loud Guitars,” which was originally released in 1986 on Twin/Tone’s Big Hits of Mid America Volume IV compilation. This is the first Slim song in the series so far not to be sourced from either one of his two solo albums. “LLLLG” is an early example of Slim’s unique, finely-tuned wit, something that would become much more evident in his later solo work. The Fellows channel Slim’s original spirit perfectly while rocking up a storm, with all four members even taking turns on guitar solos.

Last month’s auction for the Frank Black & The Suicide Commandos / You Am I single was a rousing success. Almost 400 bidders raised more than $7200 for Slim and his family, the second highest total so far for a SFS 7″ single auction. The highest bid was $202.50 and the bidding action on the final day was very lively right up to the final seconds. The continued participation in these auctions by everyone has been critical to the success of this project and is much appreciated by everyone involved.

Learn more about Songs For Slim at songsforslim.com.