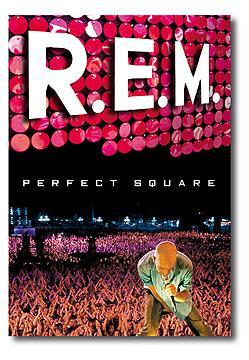 PERFECT SQUARE has been released internationally. The DVD will be available in the United States on March 16th.

This 23 song concert film was shot in Wiesbaden, Germany during the 2003 tour. The concert was held in one of the most picturesque public squares in Germany, and was beautifully filmed by director Julia Knowles. TThe DVD will also feature the documentary A STIRLING PERFORMANCE, which highlights the ways in which a small Scottish town reacts to and prepares itself for consecutive R.E.M. concerts over the course of three days in July 1999 at Stirling Castle.

*PLEASE NOTE: The REMHQ Thriftstore is only able to sell Region 1 DVDs. These DVDs will only play on players made in the USA. All non-USA residents should purchase the DVD with their appropriate region code through local stores.