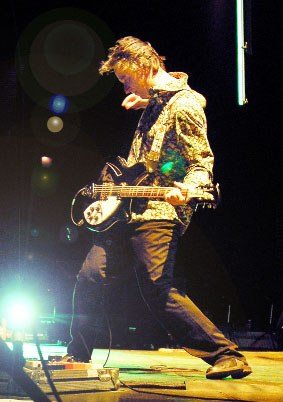 We are very, very thrilled to announce that Peter’s prized Rickenbacker guitar was returned to the band by an anonymous source late yesterday. The guitar had been missing since September 9th after it disappeared from the stage following the band’s concert in Helsinki, Finland. With this sudden turn of events, Peter will now have the guitar back on stage with him at tonight’s concert in Luxembourg. We wish to thank everyone who wrote in with their support and well wishes over the last ten days.

Peter Buckâs prized Rickenbacker guitar has been returned to R.E.M. by an anonymous source.

The guitar has been an instrumental part of Peterâs arsenal both live and in the studio since 1982âs release of Chronic Town. Its loss had been well-documented in the past week since it went missing immediately after R.E.M.âs September 9th show in Helsinki, Finland.

The guitar was returned to Peter in time for tonight’s sold out show at the Rockhall, Esch-Sur-Alzette, Luxembourg, where the band is currently on the European leg of their acclaimed “Accelerate” tour.

Peter Buck, visibly relieved, said: “It’s great to have it back in my hands. I’m looking forward to playing it tonight in Luxembourg.”

Bertis Downs, R.E.M.’s manager said: “We were always hopeful it would turn up, and thanks to the efforts of a lot of people, we are thrilled to have it back in Peter’s possession. We are grateful and very happy that it worked out this way.”

R.E.M. HQ @remhq
18 hours ago
April 1987: Recording sessions for Document continued in Nashville, TN at Sound Emporium. Among the tracks recorded was "The One I Love," soon to be the band's first top ten hit upon its release in August that year. Live version from Tourfilm, 1990.
https://t.co/epHKe9RTuw
View on Twitter
25
223